Showing posts from February, 2009
Show all

The Planet of the Apes (TV) 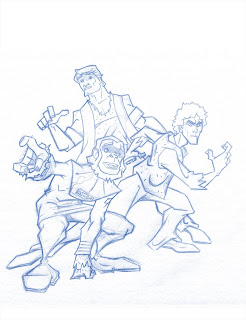 I grew up watching the Planet of the Apes. I saw the movies as Saturday afternoon broadcasts, had the toys, played it outside with my friends and brother and even got a copy of the original book from my grade school teacher for Christmas one year. I still have it too! Most of all tho, I LOVED the TV version. Maybe it was the simple plots I could follow or maybe it was the fact that I have such fond memories of watching it with my brother and my father right before he would go bowling with his league. Mom would venture downstairs to watch Sanford and Son and Chico and the Man with my grandmother. I vividly remember how the series was cancelled and the final broadcast was a re-run of the pilot which I missed. I was distraught and my father consoled me by reading the blurb from the TV Guide over and over to me at my request. As I grew older I remember watching the shows after they had been spliced together into movie-length episodes and shown on the 4:30 Movie after school for an entire …
2 comments
Read more 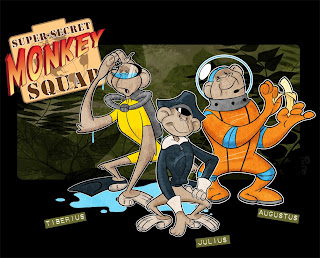 I have had this idea in my head for years now. I even kicked it around with my friend Tim about how it would work and such. Ideas flew back and forth at a frenzy. We love the idea! Problem is, neither Tim or myself are writers. We know what we would want to see but can't actually script it. I may have some help in that area soon. Anyway, after much doodling in my sketchbook I seem to have settled on these drawings at the present time. Things are still pretty fluid but I like the direction right now. The basic premise is that the government has always had a secret organization to handle things that were too dangerous for mere men. They have the Super Secret Monkey Squad. You have even seen them. The first primate in space. Ham. Or better known now as simply "H". The current group is led by Julius, Tiberius, and Augustus. Here are some sketches and the first bit of "finished" art with the logo. 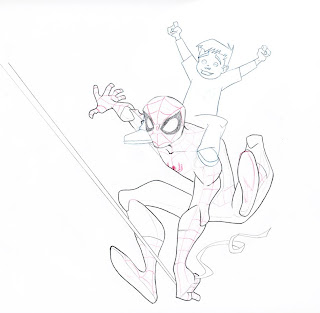 It's that time of year when I buckle down and create a custom card for my sons birthday invites. This year added the bonus of he being aware of what I am doing and he kept changing his mind on what theme he wanted for his party. I managed to steer him towards Spider-Man! Wasn't that hard actually. We both LOVE the Spectacular Spider-Man cartoon and we both play with the toys. Turns out I am a BIG fan of Sean Galloway (Cheeks) who did all the character designs. I hope I did him justice since Joseph wanted to look like it came right out of the cartoon. You can check out his awesome blog by following the link right here on mine. Now if only I can get him to have my link on his page!! 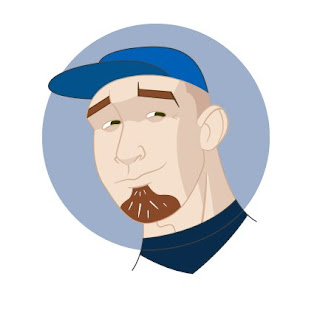 I couldn't sleep. Went to my studio after everyone else was and lost myself in some drawing. Was nice since it really has been awhile since I have been up late like this just drawing for myself. I know that I will pay for it in the morning tho. Had a sketch of myself in my book that I decided to render and use as my new pic. Not too keen on the whole self-portrait thing. Had to do an awful lot of them back in first year art school and I have not been too happy about the way I looked since. I recently lost about 60 pounds to date and can actually stand looking in the mirror once in a while now. Maybe I need to go to bed now or maybe I should call Nelson. I bet he is up working too. 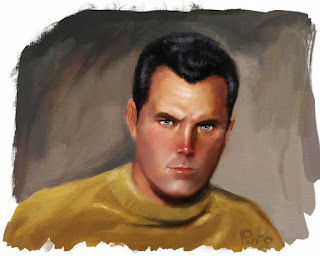 Another ArtRage project. Spock turned out so well that I threw myself into another Star Trek inspired piece. This time I used the "original" captain of the Enterprise. I don't love this one as much as Spock. I think I might have overworked some parts and didn't stay as loose as I was on Spock but overall I still think it turned out okay. 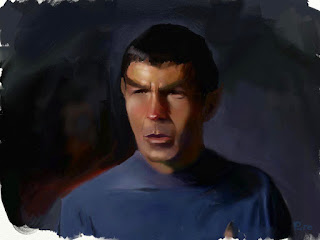 Why are you still not using ArtRage??? I did this in about an hour using the free download. It's FREE! And if you like it and want all the bells and whistles you can buy the full version for $25! Version 3 is rumored to be out sometime this year and it promises to be HUGE!