Atlanta, Crowded House and a rib So being the major geek that I am, I convinced the wife to let me travel to Atlanta to see the re-united Crowded House in concert. They were not heading as far south as Florida so I had to choose another local on the tour. I figured Los Angeles or Atlanta. Both would give me the opportunity to see some Ringling friends and the Crowdies for the first time since 1991. Did I mention that Crowded House is the greatest band ever?? Remind me later and I will post that. The trip was made even better since another old friend, Ryan, said he would tag along. I waited all summer for the event and the day finally arrived. I was giddy. The only downside was that I was still recovering from a really bad cold and had some lingering coughing and congestion. Not to worry. I loaded up on over the counter medications.

The journey there was fine and uneventful. It was a night flight and Alberto met us at the airport and brought us to the hotel. We got some sleep and then in the morning we headed out for some breakfast and then to CNN to meet up with Alberto to take us to lunch with the rest of the Ringling contingent. Was all good. After lunch we got a special tour of CNN and I was amazed at how much had changed since Jay and I went for our interviews just after graduation. I even got to lay down on Nancy Grace's desk. Afterwards we waited in the lobby for Alberto to finish his day. He met us and we began walking to his car parked across the street. I asked if we could swing past the hotel so I could take some cough medicine. As we crossed the street, I coughed pretty hard and felt a "pop" in my back. I felt like someone stabbed me. I made it across and was then bent over with my hands on my knees in pain. Alberto thought I was interested in the underground train that must have been visible and kept pointing it out to me. It wasn't until the police officer asked if I was alright did anyone get the hint that I was in pain. To make matters worse, Alberto began to rub my back as I was still bent over and Ryan stood by with his permanent grin on his face. This had to be the gayest looking public embarrassment I have been involved in. But really. What was I to do?? I managed to suck it up and took a tour with Jay over at Cartoon Network and then we all had a really good dinner before heading to the show. Everyone figured I must have pinched a nerve and that it would be ok in the morning. Did I mention we all went to art school and not medical school??

Crowded House. CROWDED HOUSE!!! They were just amazing!!! I stayed closer to the back of the auditorium in fear of people hitting me in the back and it was closer to the bar. The guys were gracious enough to keep me medicated on beer for the show. I waited 16 years to see them again and they did not disappoint. It was a great show. Even with a busted rib!! 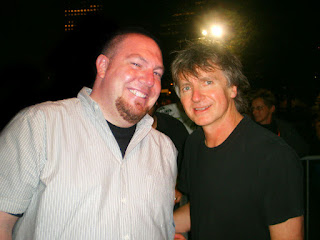 Sometimes to get to meet your heroes. Sometimes you have to rely on PhotoShop!