Now don't get me wrong. I do enjoy freelancing and the break from the monotony that I get working all day long at my regular job but with it comes its own set of hurdles. Here are several pieces I did for a bank magazine. The first one here was used as a cover and it actually went without a hitch. I used my neighbor at the time, James, to pose for it. Made him get dressed up and climb a ladder in his living room. He is always cool about helping me out and he didn't mind that I made him caucassion. He was just glad that "his ass would be on the cover of a magazine." 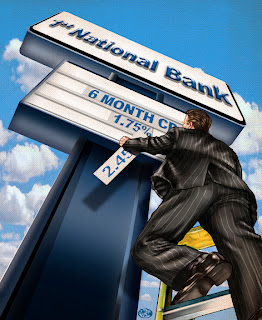 This was another cover and a real piece of shit. I didn't have much time at all and they pretty much told me exactly how to draw it. They cut a really big check tho. 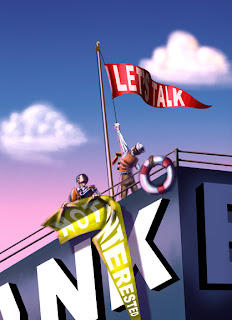 This one was actually fun to do. That's me on the far left of the piece and I also posed for the gentleman in the middle. My wife was originally the character looking curiously with the basket but I was told by the art director that the editor was sexist and that she needs to be a man. So, I became all three men. The actual final drawing of it was done during one of the hurricanes that hit Florida a few years past. I was at the end of my hallway drawing on the floor by flashlight while my wife was behind me caring for my infant son trying to sleep while feeling the walls give and take. I didn't really care for the final but I made the deadline in spite of everything and got paid. 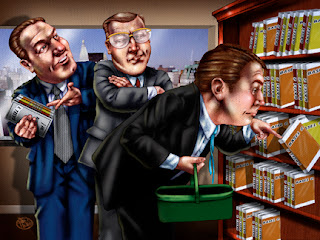 This last one was a real rush job. The assistant art director called, told me what they needed and I had like a day to do it all. I made it. It sucked but I made it. They seemed to like it, I billed them, and then the art directors went on vacation. A day later the head editor called me and seemed to not know what to say. He finally said, quite awkwardly, that someone thought that the figure on the pecil looked like he was humping it. I held back my snickering. He apologized and then said to me: " If we pay you an extra $200, can you get him off?" I burst out laughing. Then I told him that for an extra $200 I would not only get him off but I would make sure he got home safely. He was silent for a moment before saying "Fine". I got the revision the next day and they never called me for another job since. 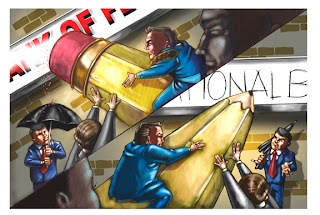 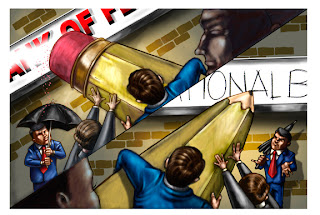