Once I knew roughly what I wanted in my composition, I began doing research and gathering reference. I can't tell you how much this has changed since I started. When I first began I had to rely on old magazines in a library, pics that were photocopied so much that the image was all broken down and freeze framing and drawing from a VCR. As the years went on, the Internet became invaluable as did DVD and permanent screen grabs in better resolution. However, I could not find pristine prints of the old 1930's movie serials and they are all grainy and fuzzy even on DVD. Of course better reference sometimes necessitated a redrawing or repainting part of the picture. That happened alot actually and if I saved EVERY version, I think there would be about 12!! Also, as you will see when this is all over, that the final drawings are not always what wound up in the final painting. As I got more experienced with Photoshop, I was able to repaint right in the file without redrawing first. You can see two different heads on Flash himself already and I will tell you that neither of these are the final one. In fact, ALL the characters have had noticeable revisions in the final piece. The one Flash head that is colored, is in fact, the very first drawing that I colored in Photoshop and was done as a test to see if I could even think about doing this digitally. I actually thought when I first started that it would be done in oils! 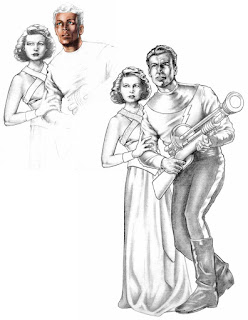 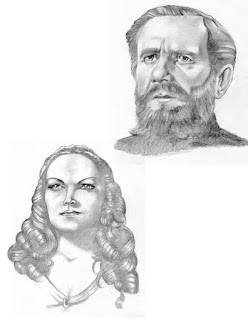