So it all comes down to this. Last time I told you that I felt I was almost done. However, that was not the case. The project languished for several years. I used a segment of it for a printer's test once but then it sat again. Finally not too long ago, here in early 2008 I opened it up and decided that I was going to finish all my projects that I started. Now armed with a plethora of custom brushes and the latest edition of Photoshop (CS3) I gave myself a deadline and thought 10 years was enough. I went back and touched up what I had already done and dove in head-first to finally paint everything that was waiting. More changes were made but they are not as drastic. The color palette became less red and distressing was added. Ten years since I started. Hard to believe. It really does seem like just last week. I hope you all enjoyed the process and the journey. If not, at least it's over. 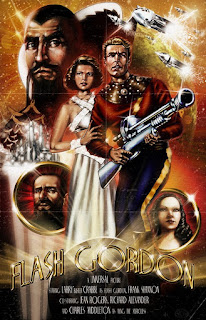