"The Skeleton in my closet is a Funnybone"

I love cartoons. I always had cartoons in my life. I love drawing cartoons and have done so professionally for 13 years. Somewhere along the way I must have angered the cartoon gods. Why? How? I don't know. I hope to find out one day as long as it does not appear to me as a safe or piano falling on my head. Why do I think I am cursed in some fashion? Well, let me tell you. I really love seeing my friends and peers names in credits of movies and TV shows. I have seen them on Spider-Man, Lord of the Rings, Tarzan, Mulan, etc. My good friend and former roomie is currently working on The Spirit. Me? My credit?? A piece of shit cartoon made ten years ago when I worked at Funnybone in Connecticut. I hated working on it and I hated the final product. I have to say that it was the worst period of my life and I am sure those who knew me then would agree that I was not happy. And I am sorry for those around me that suffered as a result. I thought all this was long gone. I stopped working there, moved back to Florida, they went out of business, etc.

My new boss is moving and as a result, is purging from his home where he lives with his wife and son. His son is now 9. He has outgrown many videos that he once watched repeatedly and my boss brought them to me so my 4 year old can enjoy them. Sitting on top of the bag was, you guessed it, the damn cartoon. "Who Spilled the Juice in the Caboose". Sounds like a title for a gay porn film. I had this tape on my desk at home for several months and I would just shake my head at the irony of it. I didn't watch it. Yet. This past weekend my son found it and insisted I play it for him. The only VCR in the house is in my office, so he had to watch it there. Over and over again. Must have been about nine times in a two day period. I had to leave the room since I became more and more agitated as the video ran. I actually became angry at the memories of things that happened while making this crap. Now my son freakin' loves it!!!! I had him in the shopping cart yesterday at the super-market and he started singing the songs!!! I guess you could say that it's my fault for not throwing it away or giving it to another family, but I figure I am now serving time for past regressions and maybe there is redemption at the end of it all. Maybe.

Just to post some drawings for this entry, let me illustrate (pun TOTALLY intended.) what kind of artistic aptitude I was dealing with. I am not claiming to be the most gifted character designer, but please, look for yourself. First, let me show you what I came up with for a character called Boo. A young rabbit who is shy and a bit demure. That is all I was told to work with and I came up with this 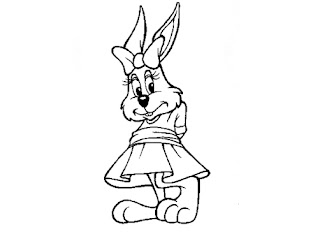 After the powers that be saw it, I got a pat on the head and told that it was "missing that Funnybone something". I didn't know that the "something" they referred to was shit. They took my design and handed it off to a more "seasoned" staff member (read: no talent hack with his nose jammed up the art director's ass.) for "refinement". Fine. This is what his final product was. 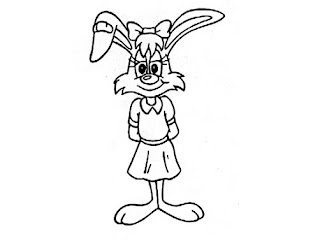 I pray to Winsor McCay, Chuck Jones and the Nine Old Men for salvation. Pray with me.