Maybe I should use a different title. I don't really think the quality of the sketch is "incredible", but I can see how someone without previous "Hulk Knowledge" could mistake that for. I did this late at night before sleeping. I actually only drew half of the figure. When I scanned it in I copied and flipped the drawing making the whole torso. Then I went for a marker comp look. Most likely since I was at work and I was supposed to be painting a car for Talladega and I hate designing Nascar stuff. I kinda like the pic but I am not in love with it. I think I stopped because I became aware how muscular I drew him. I think at this juncture I prefer Kirby's original look for him where he is big, but not incredibly defined. Just bigger shapes rather than every muscle detailed. I am going thru a bit of a Kirby phase with all the books on him I have recently read. I don't think I will be doing my own "homage" to Jack. There is enough bad Kirby style copy cats out there and I don't think I need to toss my cap into that arena. 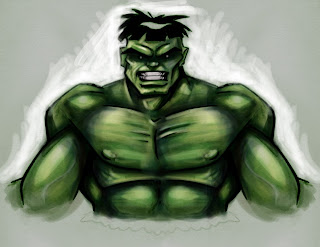