Drew and the Ranger

Vacation was great!!! I didn't draw the whole trip and came back re-charged. Sorry I have not posted sooner. Yesterday while driving in to work I heard about the event Disney held in California and spoke about future projects. Seems that Johnny Depp was on hand in Jack Sparrow attire and they formally announced a Pirates 4. Now I like the Pirates movies and look forward to another installment but it was the OTHER announcement that really made my ears prick up. Seems that Mr. Depp has also signed on to play Tonto in a Lone Ranger re-make!! Apparently it's being done by the same writers/producers as Pirates so my expectations are high!! I was giddy. That euphoria was tempered later in the day when I finally got around to checking web-sites I draw inspiration from. While it was not posted on his official site, several sources had it on hand that Drew Struzan has retired. Now I know that he would not be producing his art forever, it still came as a shock. Mr. Struzan has and will always be a major influence in my life and words cannot express my sincere admiration for a talent and individual such as he. I wish him the best. While on the subject, let me share you a quick story. Several years back I was working retail at Disney World while in art school. I was in the back putting away merchandise when my co-worker came in from the shop and sat down. He then looked up at me(I was on a ladder at the time, I am not that tall.), and said, "Jon, you go to art school, right?" "Yeah. Why?" I replied. "Because I was just talking art with some guy in the shop. He paints all the Star Wars posters." He says straight-faced. "Um. WHAT!?" I say. "Nicest guy. Maybe I should have gotten you, huh." "Are you telling me that Drew Struzan was on the other side of that door and you DIDN'T get me???" "Yeah. Sorry." At that moment I climbed down the ladder, whapped him on the back of the head and announced I was taking my break before I killed him. I never met the man, but I got close.

So here is my piece for today. My best (and not very good), digital Struzan homage of the Ranger. 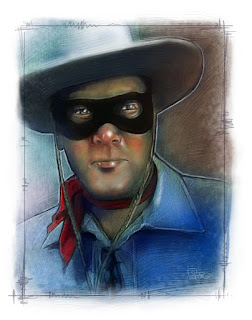