Take me out to the ballgame.

I really love baseball. You would think that I would paint more baseball pictures since I love it so much but to date, I have only done three. There is a fourth in the works down the line, but more on that one later. The first one I did was for me. I have always admired the story of Lou Gehrig. Lived in the shadow of Ruth and struck down in his prime and he is mostly known for the disease that killed him since it now bears his name. I painted this not long after graduating college while living in Connecticut. I did it in a method that I could not while in school since you had to allow for lots of layers and lots of drying time. Yes. It's oil paint! This is also one of the few works of mine that actually hangs prominently in my home. 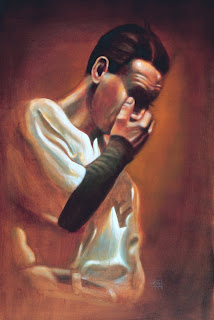 The next one followed about a year later. This was done for two reasons. Firstly, I wanted to explore options of using some airbrushing with my work. I had recently switched to water soluble oil paints and knew that I could thin them enough to push through the airbrush and wanted to work on board instead of canvas to incorporate more drawing into it as well. I was good with it but I have yet to really explore more of this technique. The second reason for it was for it to be a gift. My uncle in Connecticut had showed me much generosity in my life and recently showed me how brave he is while dealing with a kidney transplant. Joe DiMaggio was his all time favorite so that is the subject of this piece. 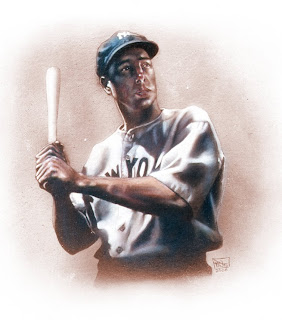 Well according to my Aunt, the DiMaggio painting went over really well. The problem was that while my Uncle was a Yankees fan, she was not. She roots for the Red Sox. So to make things fair, she wanted a painting of Ted Williams. I procrastinated for about 8 years with this. I am NOT a fan of the Sox. I was raised a Yankee fan and now root for the Rays. But oddly, it was my love of the Rays that finally made me want to actually paint this one. You see, a few years back the Ted Williams Museum was relocated to Tropicana Field. Home of the Rays and admission is free. In said museum are many photos and memorabilia from Ted Williams and other great players. There are also many works of art and there was a painting there of Ted that really inspired me to do my own. That and the fact that my family and I are about to embark on a vacation that will take me back to Connecticut for the first time since I moved out. And we will be stopping off at my Aunt and Uncle in Hartford. The planets must have aligned and the painting went very fast. I was pretty pleased with the result for only working about ten hours on it. 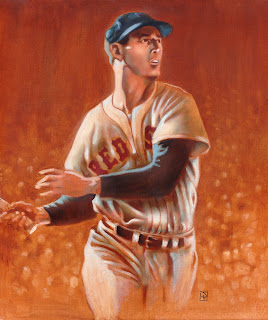 And there you have it. Oddly, it occurred to me as I typed this that I have never seen a single one of my subjects actually play the game. That will change with my next baseball piece. A great player with a great story too. I hope the painting is worthy. I look forward to it.