Okay. These were found along with the last batch but not dated. I am guessing that they are from '89 -'91. I know that they were all done before moving to Florida back in '92. First up is Captain Marvel. I had bought the old Republic Pictures movie serial and LOVED it! I then found out that the original artist (the late, great C.C. Beck) modeled the good captains face on Fred McMurry at first. For those of you who don't know, he played the dad on My Three Sons and was in the original Flubber movie. Anyway, here is my unfinished Captain Marvel (SHAZAM!). 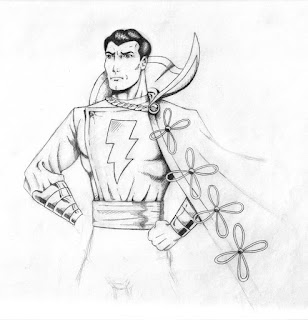 Next is when I first really became a fan of Kirby's Fourth World series. I think DC had reprinted them around the time and I fell in love. I still love these characters and recently re-read them. Maybe time for a new pic. Hmmmmm.... . But I digress. There is more of a 70's John Byrne influence on hand here mixed with the still present Perez look. Well, maybe not but I thought it looked it at the time! 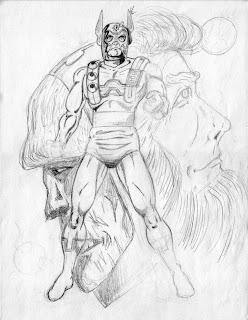 This one might be a bit random. Magnus, Robot Fighter. Cool name. I don't really know much about the character except that he has been around for quite some time and some significant people in the comic industry have worked on him. Well an offshoot company (Valient???) tried to revive him and Bob Layton drew some amazing covers that blew me away. Unfortunately I could not get over the fact that this kick-ass, robot-fighting, classic character is wearing a skirt!! Added to that, I suck at drawing cool looking robots and mine looks like he killed Bender from Futureama! 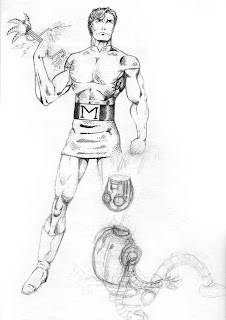 Lastly, I have the Rocketeer. I loved this comic and I loved the movie. I also had the good fortune of actually meeting Dave Stevens. He was at some odd horror movie convention at a college campus in New Jersey and my friend and I noticed his name on the sign out front while driving by. We immediately parked, payed and went in. Nobody knew who he was. Turns out Dave must have been a fan of these old B-movie actors because when we found him, he showed me his newly signed autographed picture of someone that I still don't know! He was beaming like a kid and was sharing with me like I had known him for years! He graciously signed some stuff for me including a litho of the Rocketeer that still hangs framed above my desk. When he passed away last year I was deeply saddened. I can never compete with Dave's lush art but I still like this drawing. 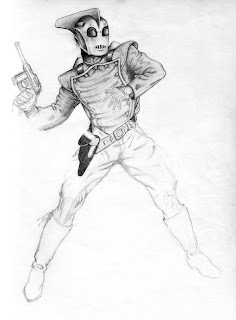