To me he was Miracleman. I had no idea that he existed years before in England as Marvelman. I first read his adventures when they were reprinted for the first time in America and had to be re-titled for legal reasons. Anyway, those first several issues written by Alan Moore and drawn by Gary Leach and Alan Davis simply blew me away. Super beings in the real world?? Who heard of that!? We have since become diluted with that concept in the years since but to a kid in high school who grew up on 1970's Marvel and DC comics, this was a far cry from what was out there. Today, there are so many legal entanglements around the character that even he, with his much vaunted power, could conquer. Sad. The only ones really suffering are the fans who have been deprived of not only new stories but the old ones since they cannot be reprinted at this time.

I kept this one simple and straight forward. Just a simple line drawing from my sketchbook that I colored in Photoshop. Enjoy. 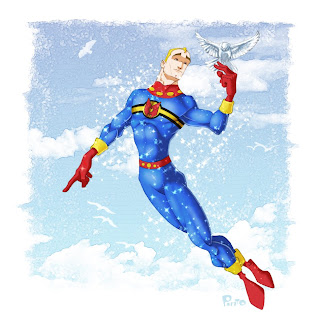