Ghosts of Photoshop's Past

When I was in art school, they had not yet embraced the coming digital age. Thus, most of my education was focused on traditional media. My class had one half-semester of "digital illustration" where they tried to show us how to use Illustrator. It might have been version 3! Having never seen computers like this before, I was lost. There was no textbook and if I tried to keep notes I would not be able to see the teacher using a plethora of shortcut keys. I did not take to it well. Then, just before graduation, someone showed me the key basics of Photoshop. I was thrilled that I could scan in drawing and compose pages for a portfolio and not spend countless hours and money at Kinko's cutting and pasting and copying! Those were the days!! Then I started dabbling in making a picture right in Photoshop. Of course we had no wacom tablets then and drawing with a mouse was a no-go. I settled with scanning a drawing from my sketchbook and simply coloring it. Digital glazing I called it then since all I knew how to do was put down color and lower the opacity and repeat the steps until the picture was fully colored. Took me a long time too! The results seem to have been worth it tho since the fruits of that labor garnered me an entry into the Best of Ringling and a showing at the Society of Illustrators in New York for an illustration publication whose name escapes me now. Was fun and I was on my way towards a digital future. On a side note, I found it striking that when I graduated, I had two digital pieces that I would point out to interviewing employers and then years later when I returned to be the recruiter, the students were pointing out the one or two traditional pieces that were in their portfolio.

Now recently being "pushed" into the freelance game, I have noticed that most everyone asks for a "consistent style". I, of course, have been more of a chameleon most of my career and it had served me well. Now, thinking I need to focus in, decided to re-visit some old pieces that no longer resemble any way in which I work now and revamp them to be more uniform. The first was,.......the first. I felt a little weird re-doing this piece but I also found it fitting that it should be the initial piece tackled. Now, I find nothing wrong with it still, it's really just the matter that I don't draw like this and I don't work like this anymore. Nor do I wish too. The original took me several days if not a week if I remember correctly. It was not eight hours a day for a week straight, but more like an hour or two here and there but about a week nonetheless. The revamp took about five hours straight. I hope you like it or can at least appreciate my thoughts on it.

Here is the original: 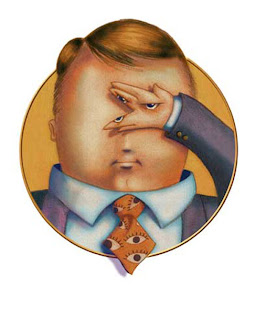 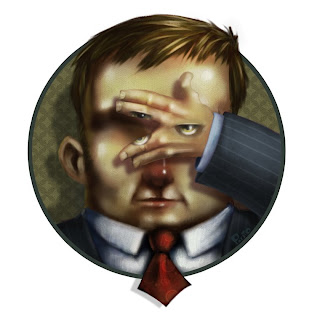