I had heard of Captain Action most of my life yet knew almost nothing about him. I mostly saw ads for the toy in old comic books but knew that they didn't make him anymore by the time I read those issues. I even saw an issue or two of the old DC comic that had some great Gil Kane artwork in it. Several years ago I started to hear this and that regarding the character in that someone was trying to revive him and make new toys and such. Then, just recently, I got one of those mailers from my high-school to keep graduates up to date with goings on and such at the ol' place. I usually just glance at it and skip right to my graduation year to see if anyone I knew has done anything interesting. For some reason I read the whole thing this time. Must have been a night with no baseball on! Anyway, while reading about past graduates, I come across a name and I read that a fellow graduate (a few years older than I, I must add.) now owns the copyright to Captain Action and has been trying to revive him. I recognized the name from the other comic newsletters and magazines I read. Wow! I guess that sparked my interest to examine him further. I was also inspired to draw a pic of the good Captain.

At first I was simply content to follow the same path artistically has I had with my Planet of the Apes piece not too long ago. I got a basic pose I liked and set to work. When I had him scanned, digitally traced and ready for detail, I initially thought that it might be fun to fully render him out in Photoshop from that point on. I started the process and then stopped about two hours in thinking it was a mistake and I should just go back to my original plan. So the next night I went back to Illustrator and started over. As I was working tho, I decided I would at least push myself to see how far I could render him in just Illustrator. Was a good time to do things I could not do since I really came to know the program making t-shirts. One tool in particular, I had never gotten an understanding for: gradient mesh! It took me longer than I thought it would but I am very pleased with the results in knowing that IT WAS ALL DONE IN ILLUSTRATOR. I don't know if I would do it again like this. I mean, some of it would have been SO much faster in Photoshop, but I do like the fact that it is all a vector drawing.

Here I posted both the finished piece and the progression that the figure took from sketch, digital inking, refined ink with color fill and the final painting. Enjoy. 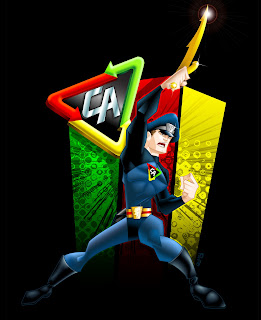 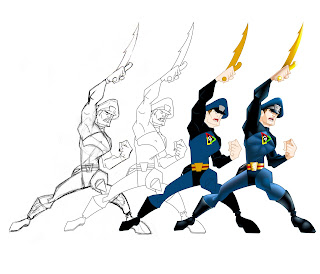