Here we go again. Yes, it's another trip down memory lane for Jon. Before he was Bobby Ewing and re-appearing in a shower as the worst sub-plot in television history, Patrick Duffy was a water breathing crime fighter for one season of "Man From Atlantis". There was even a Marvel comic adaptation of the series that I recall reading as well. I don't really remember which came first for me. It was really my older brothers comic and he "let me" read it on occasion. The show was very much a formula. Duffy was the last citizen of Atlantis, or so we thought since he also had amnesia, who washed up on shore after a storm. He is found and rescued and when it's discovered he has gills and can swim deeper than a submarine, he is used by the government for covert operations. What's not to love??? The great Victor Buono (King Tut in the old Adam West TV Batman show as well as recurring roles on Wild, Wild West) played Mr. Shubert, a former junk collector turned would-be world conqueror. I actually have a "borrowed" copy of the pilot on DVD and it's watchable and I am sure there are clips and such on YouTube if you are so inclined. A simple google search found me many treasures including an awesome TV Guide cover painting back when TV Guide covers occasionally had awesome artwork! I almost didn't want to post it since it's cooler than my pic! 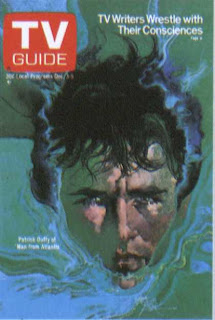 There was even to be a Man From Atlantis toy line that was in the works but scrapped since the show was cancelled so quickly. Darn it!

This one is another Illustrator pic. Enjoy. 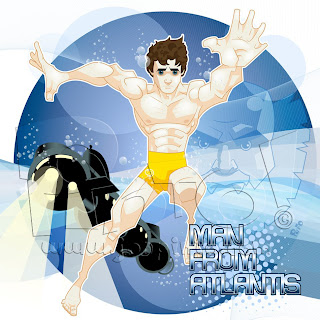