I knew this one would be fun to draw. With a very expressive face and a fun hat! I admit that I didn't follow his outfit that he wore on the series from 1987-1989. I followed the one he briefly wore in the 1996 television movie just before regenerating into the Eighth Doctor. Purists may balk, but hey, Sylvester himself admitted he liked the movie outfit better as well. It has the same basic shape just made with better fabrics and WITHOUT that ridiculous sweater! It was covered in question marks for cryin' out loud!! I know, I know. How can I pick on the sweater after enduring the outfit worn by the Sixth Doctor. At least his didn't have question marks all over it. What the heck were they thinking???? If you still want the question marks,.........look really hard at the vest and hat band. 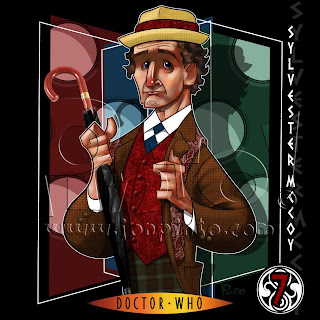