There is a theme for today entry. Peter Pan. A long time favorite of mine. I pretty much love many versions seen on film and have more than enough printed versions featuring several different illustrators including the original Arthur Rackham version.

The first one was originally done as an assignment in college. It done with the use of photo reference. My roommate Chris Nosek was used for Hook, my friend Magdi as Wendy, Nicole as Tinkerbell, Mike Greenholt as John and finally Jan Roberts as Peter Pan. The costumes were loaned to me from the Sarasota Players and I made the Pan suit. That part went well and the drawing was fine but I really dropped the ball in the finished painting. I just didn't have enough time to do it the way I wanted it. I learned a lot!! Several years after graduating and right after moving back to Florida from Connecticut, I reworked the drawing using the original reference and then re-painted it in the computer. I remember finally being happy with what I started from. I wish I had Photoshop when I was in college!! 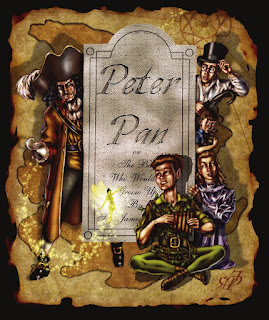 This one was done originally just for fun. I had a drawing of Peter Pan I had done and decided to elaborate on it. Again, this was done during my learning days of Photoshop. I hand drew everything and then scanned it all in to paint and compose. I also started playing with layer effects here. I then wound up selling it to Disney as a limited edition watch. It sold out and it made me very happy. 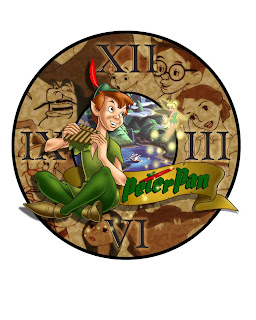 Finally I have something I did when I was REALLY bored at work one day when I was working on Main Street USA at the Magic Kingdom. This was all done with markers and colored pencils. I just with I used reference for this one. 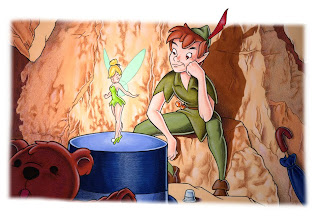