Odd title, I know. There is a group on Deviant Art that held a contest recently about doing an illustration based on one of the audio adventures of Doctor Who. I thought that sounded like fun and I came up with a sketch pretty quick as I was listening to one in the car during my commute in the afternoons. It was also an opportunity to draw a "modernized, retro Cyberman". Still with me or has my total geekiness turned you away already?? Anyway, it was also an excuse to draw the 8th Doctor and the lovely Sheridan Smith as Lucie Miller. I hope I did them both justice.

The sketch was pretty straigtforward and at this point I was not thinking about anywhere else it would be shown except on the website for the contest. 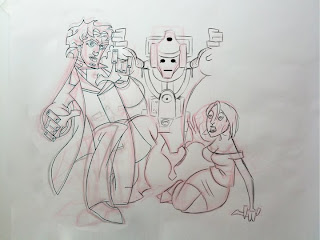 I was happy with the sketch and proceded to do a quick color study in Photoshop. Really raw, but I liked where it was going so I quickly started to work on the finish. Life got in the way at that point and I had to let it go in order to meet a previously held deadline. I was ok with it. The winner was to get about 30 bucks. No great loss. I did decide to finish it tho. 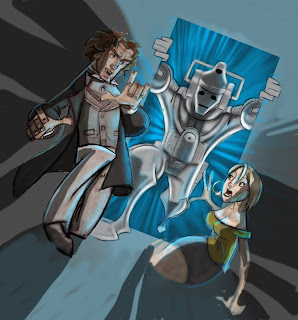 So now being committed to the cause, I went ahead and worked on the final, but now my thoughts were on possible reproductions and the size did not work any longer. I had to change it to an 11 x 17 format for that to happen. Hope it still works. I kinda like it. Enjoy!! 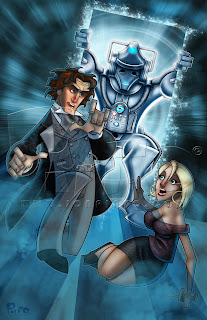