I probably should have been too old to watch Inspector Gadget when it was first on TV. But I did watch it, and I had to keep it a guilty pleasure and didn't reveal to anyone that I watched it until my friend Rob told me he watched it. Now I have no qualms about admitting my love of cartoons and toys and anything else geek related. I came out of the geek closet many years ago.

I have not seen Gadget in a long time. I try to forget the live action movies and I have not seen the direct to DVD offerings. I am curious tho. I came across the intrepid Inspector in my iPhone app store! They had a free game and I downloaded it. The next thing I knew I was drawing Gadget! Well,......... sort of.

I was waiting on feedback on a project at work one day and I had been curious to explore an aspect of Illustrator I had not used before. The week before I needed to revise some art that was vector based and instead of making a jpeg and drawing in Photoshop or on a printout, I drew directly in Illustrator. I kinda liked it too! I know people out there use Flash and actually read in someone's blog that they work in Indesign! Don't even know what that program looks like so I can't really comment on that. With Gadget, I wanted to push it a bit more than what I had done before, so not only did I do my sketch, but all my coloring as well. I posted the "outline" mode version so you can see that it really is all vector. Was a fun experiment!

Here is my final with all the bells and whistles. And with Inspector Gadget, I really mean that. 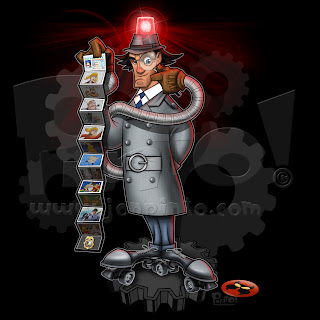 Here is the "vector sketch". 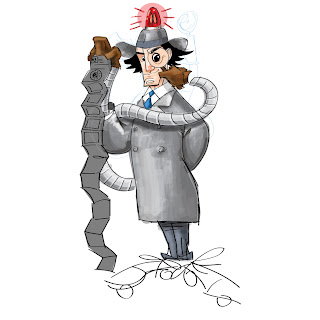 ...and here are the view showing the vector paths. 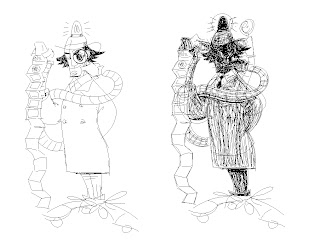