I first met Nelson outside the library on the Ringling campus early in my sophomore year. My roommate Alberto introduced me to him. I don't really know why I remember that. I can't say we were friends in the true sense of the word back in college. We were always friendly to one another but our paths never crossed much in our major classes. I knew he could draw and I knew he could paint. I envied his natural talent in drawing the human form and his mastery of sketching on location. Like me, he was always looking for new ways to express himself and try new things in the classroom. I am sure some of it was being creative due to lack of funds for real supplies! I vividly recall him bringing in a wall to figure painting class in our junior year. A FREAKIN' WALL!!

Right after graduation we were both hired by Funnybone in Connecticut along with another handful of classmates. Something went wrong with his living arrangements so I invited him to crash in my apartment for a time. Things about the job had already began to make my life depressing ( Nelson actually arrived about a week or so after me.) and I was not happy to be back in the northeast. This tainted my actions and my outlook and to this day I am left with regret for how I behaved. I am sure Nelson got the brunt of that. Looking back, I should have known that it was not the end all, be all of my life and career and let myself just enjoy the moments in front of me. But then again, hindsight is always 20/20. Nelson never said a bad word to me. He was a good friend.

I left Connecticut after about two years and headed back down to Florida and lost touch with Nelson. We randomly chatted once or twice due to a mutual friend but that was it. I got married and found new jobs. So did Nelson. We reconnected a few years ago and found out we worked near each other and managed to get together for lunch now and again. We even managed a few dinners so our wives could meet too. Good times all around. After I lost my job, Nelson suggested me to his employer and I was hired based on his recommendation.

Nelson left this past weekend to take a new job at Cartoon Network in Atlanta. It sounds like a great job and he will be in the same city with many people we know from Ringling as well as working with his friend from Orlando. He will be missed. This time we may part but now I truly consider him my friend. I think back to my first day at my current job when he said to me, "School. Funnybone, and now here. We are linked forever you know. Three times is beyond coincidence." You know what the annoying thing about him is? He's usually right! 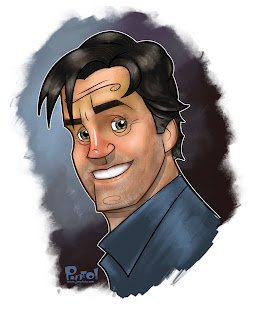 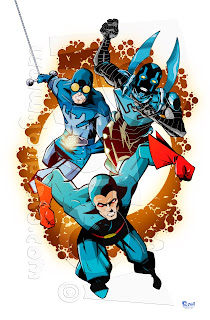