Turning back the clock

So the time has come once again to dig deep into the vaults of the Pinto archieve to show you how the fledging young artist began to cut his teeth. I don't really know when these were done but the best I can guess is around 1977-78.

I always thought of myself as an undiscovered talent in the comic book market and was just waiting for Stan Lee to notice and put me to work doing whatever the heck I wanted and giving me a check for it. Sweet dreams of youth! I remember drawing this pic and worked pretty hard with a pencil and crayons to do my own inking and coloring and to pull off the cover of my comic. Notice, it's a first issue! Too bad there was never a second! I made this character up and I actually drew him for years after this initial foray. I changed the costume not long after and I even had an entire binder filled with drawing and tracings of the guy. I am pretty sure all those are long gone but at least I still have this, the original pic and that is thanks to my Mom. 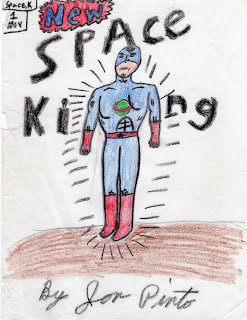 This one, I think was done maybe up to a year later and I think that because of the way the muscles are drawn. That would not sound so weird if this was another drawing of a super-hero, but oddly, ...it's of Pinocchio. I have absolutley no memory of drawing this or why. I apparently gave it to a classmate of mine who was kind enough to scan it in and email it to me. Thanks Karen. I also have no idea why she kept a picture of a muscular Pinocchio. 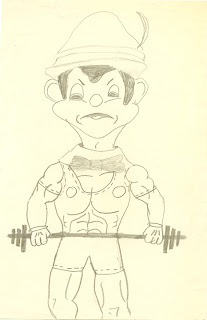 Also please note the lack of watermarks on these two pieces of "art". Feel free to print these out and sell them. Good luck.