Working on The Night Shift

Way back in Feburary, I ran across a blog that spoke about my work being stolen and sold without my consent. It wasn't my blog, if that is what you are thinking. I mean that someone else had taken notice and was kind enough to write about it and help spread the word. I was touched that someone thought enough to do that and I contacted her to show my appreciation. What I didn't know at the time is that Erin is also quite a talent and makes really cool films with her husband. I followed a few links and watched the trailers and the original short of a film called The Night Shift. It's REALLY cool! I thought it had a teriffic and original premise and the characters were awesome! I started some doodles but didn't initially proceed because another artist, Kyle Henry, had already done an awesome painting (and with real paint!!). I didn't want to try and follow that! Over time tho and after doing my Mercury Men picture, I decided to actually give it a go and just take it my own way. As I write this, I am not done with the final but I am getting close enough to start posting doodles and such. My plan at the moment (besides getting ready for the Hurricane Who show) is to have this done by the time the DVD of the movie length version is out. I have not seen it, but I am waiting to pick up my copy at my local Wal-Mart! It can also be purchased at Amazon.


Some of the initial thumbnails were photographed with my iPhone and unfortunatley they are all that remains of those initial sketches. Glad I at least had these poor photos. The ones with the yellow paper on done on post-it's!! 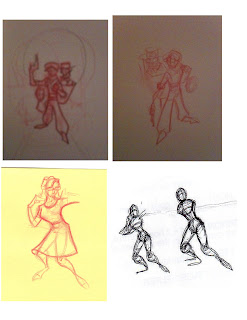 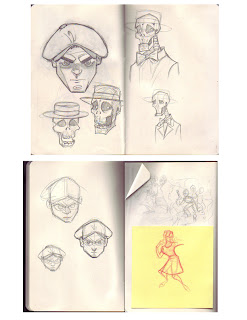 Once I got my basic idea, I roughed out a bigger composition right on the computer and then quickly did a value study. 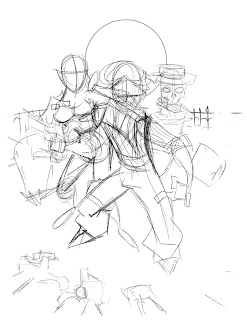 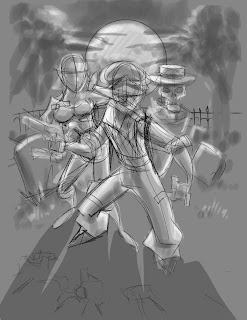 That's it for now. Stay tuned for further updates! Enjoy!!