I Survived Hurricane Who 2!!

So my first convention appearance is now in my rear view mirror. Wow!! Overall I have to say that I had a GREAT time! The first time you do just about anything is met with some trepidation and this was no exception. I didn't know anything about "loading in" and the behind the scenes stuff at shows like this and really proceeded with caution. So glad Mindy was there with me to keep me from getting over run with nerves. I knew starting off with a small show such as this was the way to go tho, and I was correct with that at least. We didn't exactly sell out or turn profits, but we did better than expected and had some other perks that you can't put money on. I got to meet some really awesome people!!! I don't think I was set up for more than 10 minutes when a kindly, soft-spoken gentleman came over and introduced himself with a "good morning" salutation to boot! My jaw hit the floor and I admit that I had to take a fleeting glimpse of his name badge to confirm what I already knew and that I was shaking hands and conversing with Mr. Jeremy Bulloch. Boba Fett himself!!! He was as nice as can be and not only in complementing my work but then sharing stories of working on Doctor Who and Star Wars with no prodding.  Check out the picture!! 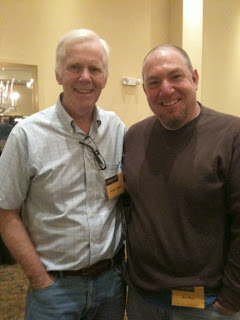 It sure didn't stop there. Some of you may know that I began my Doctor Who fixation back during the mid-80's with the Fifth Doctor and one of the biggest villians he faced was not just the Daleks, but the creator of the Daleks! Davros!! Played then by Mr. Terry Molloy. Again, he could not have been nicer. He even got one of my t-shirts! DAVROS GOT ONE OF MY DOCTOR WHO T-SHIRTS!!!!!! Both gentlemen were kind enough to sign prints of their characters that I had painted for me as well. 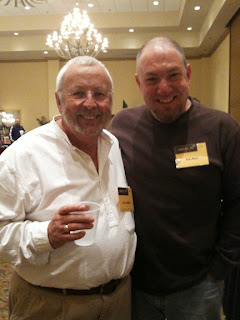 Here are two guys Mindy and I have seen on tv as well. Ghost Hunters International. Again, both super nice but Scott (on the right of the photo) was not feeling well. I kept telling him to not touch me because who the heck knows what kind of germ a Ghost Hunter will be carrying. Unfortunatly he is reaching behind Paul in this picture to rub his hand on me!! I got a big kick out of Paul being a HUGE Doctor Who fan and when Naoko Mori from Torchwood was signing right next to him, Mindy and I got a big kick watching him turn red! I thought his head was going to explode! 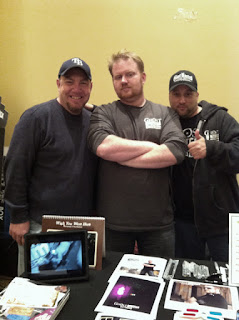 There were some other great moments too. All the other dealers were fun and gracious with advice for future shows and I had fun talking and hanging with them. I hope to see them at other shows. Jimmy, if you see this, I am really sorry for not saying good bye!! I had some cool moments with several kids that are going to my alma mater, The Ringling College of Art and Design. Kinda neat that I was signing stuff for them. I also had a blast talking to all the fans who just turned out with and without costumes. I hope you all had fun! Here are some pics I took.