I have no idea what started me doodling this pic. I was probably really bored at whatever I was supposed to be doing and went off on a "creative" tangent. It's been such a long time since I attempted to digitally paint on a single layer and treat it like a traditional painting and work from dark to light. I probably failed in that, and other, departments!!

On the left is what I came up with. What a turd! I guess there are certain aspects I can take away as a positive and know that it was just an exercise but WOW what a boring picture! The one on the right is only slightly better as I re-sized and pushed the values a lot more but still boring. I will mention that up to this point I spent about fifteen minutes. 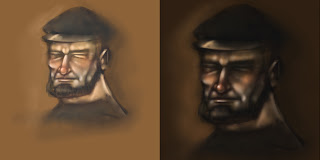 While I was riding the wave of experimentation, I thought I would bust out the liquify tool and have a go. I admit to not being very well versed with that exact tool so I threw caution to the wind. What a risk taker eh! 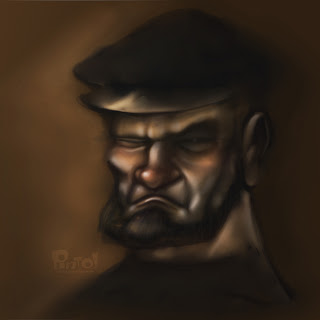