Seems like every year around this time I find old work to show here and blog about. It's almost become a tradition. Mainly I think it stems from the fact that I don't do much personal drawing during the holiday season as time is never there for it so I am left with a void of material to talk about. Maybe I am just lazy. I actually do have several pics all done and ready but I am not able to show them for one reason or another but I digress.

This first pic was done back in my junior year at Ringling and the topic was "music censorship". I still like the concept of my pic if not the execution. This was also an experiment with painting with alkyds on board as well. 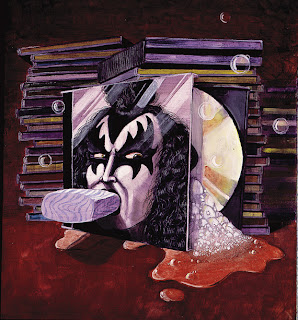 This next one was done early in my senior year and I think I was getting lazy or was looking for a different look to my work and use a "character" rather than drawing such realistic people. It says "Spam" but it's really just crap. 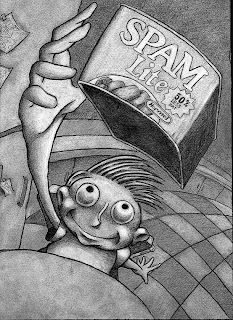 This one I may, or may not have, shared before. See, I am really lazy. Too lazy to even go back and check my own blog! This was charcoal on board and was the very first assignment back in Illustration 1. We were given one word to illustrate and the word I got was "together". 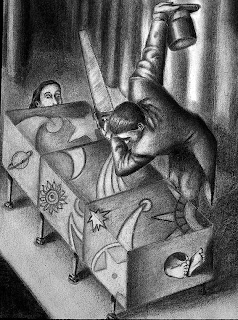 This one is fun! Back when I worked at The Magic Kingdom, I had a manager that was (is) really cool. Well, to me at least. We liked the same cartoons and such and he has a great sense of humor. I don't really remember why I drew this pic but for some reason I made him a "toon". He liked it and remarked that I made him look like "Ron Stoppable's older, cooler brother!" Huge praise indeed!! 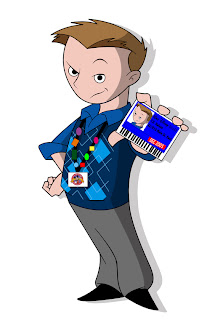