Last month I received an email from someone in the U.K asking if the product seen at www.alittlestyle.co.uk was legit. He sent me a link and I looked into it. It most certainly is NOT. I never uploaded my art to this site nor have I endorsed it in anyway. I was never contacted by the company that posted it nor the person that uploaded it. IT'S STOLEN!! Readers can easily point out that it is the exact same piece that I have had trouble with in the past. I even blogged about it back in 2010 (link)! I immediately contacted this company thru their website as well as using their company email. The contact was ignored and the email was returned as "undeliverable". I tried again and it was once again returned. I tried two more times. All returned. I created an account in order to leave a review to point out that this art was stolen and that was never posted. So I called them. I spoke to a man that identified himself as Eban and I explained who I was and what I was calling about. He asked for the product number and I read it off to him. He denied that this was a real number that his company used. He then asked me to email him with the link so he could find the item in question. I explained that all my emails were returned and all other correspondence was ignored. He assured me that they had a computer glitch with their mail and it was now fixed and I could now re-send an email. I hung up and sent a new letter. Guess what. IT GOT RETURNED!!

This company is obviously not a reputable company and uses less than honorable business practices. I would recommend that you DO NOT USE THIS COMPANY! In fact, spread the word about them. 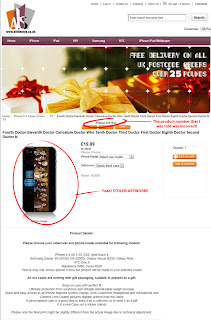