The Lone Ranger. Part One

So here I go again with another multi-part post in order to have stuff to blog about and keep you coming back for more wondering when that final posting will come so you can see the only thing you really want to see. The final picture. Well, you are just going to have to be patient and bear with me as I drag this one out.

I have been a fan of The Lone Ranger for as long as I can remember. I watched re-runs of Clayton Moore (and John Hart, lets be fair here.) as a young boy and my dad took my brother and I to meet Lone Rangers at local super-market openings and such back in the early 1970's. I don't have any pictures of meeting them but I really doubt that I actually posed with either masked man. I will be really pissed if I ever come to find out that I did indeed meet a screen legend and fail to have a memento of it! My favorite childhood Christmas was when I received my Lone Ranger and Silver figures made by Gabriel!! They are still on my shelf sitting above me as I write this post. Ahhhhh. Long time readers can probably remember that I have wrote about The Lone Ranger before and I have even posted several pictures of him as well, but with the new movie coming out soon, I figured it was time to do yet another one! With the new interpretation of the classic hero and his faithful companion. If you want, you can do some of your own research if you are interested in going back and reading those old posts. I don't know when they went up, but I am willing to re-post a combo pic of several of that art all in one so you can simply look no further than this little ol' post here.

As you can see, I have already done a few doodles of the "new" Ranger. Very rough stuff tho and both done on my phone as well.


So not too long ago, while I was sitting in my car getting my oil changed, I began to thumbnail a new picture. It's pretty amusing to catch the guys who should be working on my car straining their necks and eyes trying to catch a glimpse of some possible masterwork in my tiny sketchbook. I must be the only customer of my local oil change place to draw while being waited on. I am sure that if any got a good look, they were disappointed with my chicken scratch. 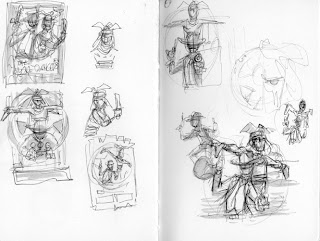 I initially thought that the doodle on the lower left would be a good picture, so I scanned it in and blew it up to see if it would hold up. I think it would still work, but coming off the one point perspective of the Star Trek picture, that I should move away from that. Here is what it looked like tho. 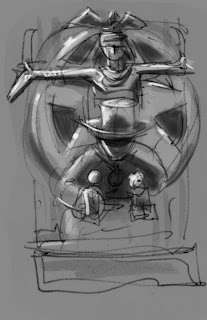