What's In The Hopper?

I always have several ideas for future pics running thru my head at all times. Sometimes it's really just inspiration hitting me from watching a movie or TV show, maybe it's from seeing a painting that someone else did, who knows. Inspiration comes from any and all places. If you ever catch a glimpse of my horrid little sketchbook, you may even see a list in the front page of things I would like to draw. Now when I started doing this whole "fan art" thing in earnest, I really just did what I wanted and was not dictated by anything! Oh the purity of it! Now, I don't feel I have strayed from that but I have done pieces because I thought they would sell better at certain shows, but I always wanted to draw that pic anyway. It does not always pan out to make me more money either. For instance last November I did the Fifth Doctor picture because I was very excited to meet Peter Davison and he was the guest of honor at the Doctor Who show. Was it my top seller that weekend. No. Not even close! I still love the piece, but there was no windfall from it at all. Unfortunately, I do have to keep those type of thoughts in my head a bit more than I used to as I no longer have a regular full-time job. So, I ask, is it really wrong to do a Batman and Robin picture if Adam West and Burt Ward are appearing at a show??? I don't think so as I would love to do a Batman and Robin pic anyway. Right now I am just hoping to be at the show myself as my budget may dictate me missing that one. I am hoping that I can get my online store up and running and hope to have a few people buy stuff too. Looking into opening up commissions as well. Am I rambling? Am I pandering?? Well, maybe just a little.

So here are a bunch of thumbnails from my sketchbook of things that are in the works at one stage or another. 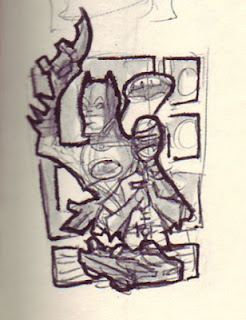 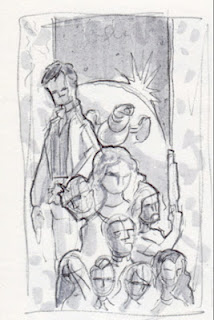 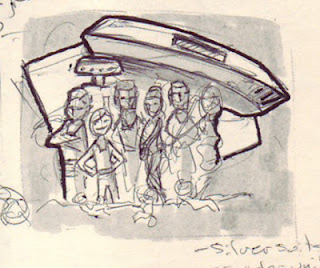