My Superman. Part One

Not the greatest of titles for my blog post, but it really does say what I want it to. I spent my early years watching the re-runs of The Adventures of Superman starring George Reeves on television like most kids my age. With less channels and programming back then, us kids lived on re-runs!! Superman, Batman, The Lone Ranger! All of them. And I loved them!! But then 1978 rolled around and something happened. In the wake of Star Wars big budget effect movies had arrived. Hard to remember now a time when someone mentioned a sci-fi movie or a super hero program and people immediately thought it would be low budget kiddie fare. Things sure have changed and just about everything out there is a sci-fi or super hero movie with overblown effects and budgets. I don't really think that either make the movies any better either. I know I am getting old because I consider Christopher Reeve as "my Superman". Now and always. Superman: The Movie, is one of my favorite movies of all time and I still watch it. I can still remember sitting next to my Mom in the movie theatre and hearing her being amazed at all the talent in the cast as the credits rolled. I didn't know any of the names then. Not even Brando!! And I sure didn't notice William Russell in it either as I would years later as I became Doctor Who obsessed. How many of you really remember the movie?? Do you know why I was blown out of my seat when Superman personally saved myself and everyone else in the theatre as we watched it in Hackensack, New Jersey! The only newspaper clipping I failed to save from back then was part of The Bergen Record (which was published in Hackensack), the day after the movie premiered, I believe, had a full page with photo that read "Superman Saves Hackensack!". Ugh!! I wish I had that. I still have the Parade Magazine insert with Superman on the cover and story inside.

So why draw Christopher Reeve's Superman now? Well, I have three reasons. Seemed natural after finishing my Batman picture, I took a vote of Facebook and I saw Man of Steel. Now, I don't want this to turn into a rant or argument about the merits or lack thereof of the latest attempt to bring Superman back to the screen, but in my opinion it was just not a good movie. Sure it looked nice and lots of shiny stuff and explosions, but this is not my Superman. If you want to read what I thought of the movie, I found a review that pretty much sums up what I thought and told it with great humor too. Plus Bob is an awesome artist. Go read it here. And I really do miss his red shorts!! Don't give me the argument that they make no sense and that even Zack Snyder didn't think a "modern audience" found them believable. Really? A human looking, flying alien in a tight blue suit, giant "S" on his chest and a red cape and boots is perfectly acceptable until you add red shorts?? I watched my Superman the next day. 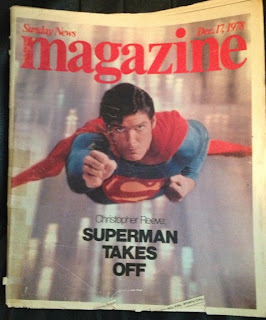