BAM! POW!! It's done!! Could not resist starting off this post with the familiar written sound effects. I used to get so annoyed whenever there was a write up in the newspaper or a story on television that was on comics and they would always revert to them even when the story had nothing to do with the classic 1966 show. That brings me to my next point. Why did I suddenly add the "1966" part to the title of the post?? Well, turns out that I have already used The Dynamic Duo as a title a few years back. *Sigh*, I guess it was bound to happen.

So here it is in all its glory. I really hope you like it as much as I do. Was really fun to work on and I hope it goes over well. I am a bit disappointed that Adam West and Burt Ward are NOT appearing at the Tampa show I will be at. Oh well, maybe I can still sell a few of them. 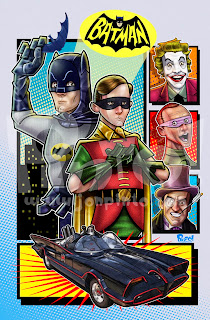 I also thought I would turn back the clock and show how long I have been a fan of Batman. Here is a photograph taken on a family vacation sometime in the early 1970's. One of the few pictures I have of all four of us. This was one of those pics you bought on site and they would place this tiny, color transparency into a tiny scope that you held up to your eye and a light in order to see the picture. I scanned it in the best I could. You can see me wearing a Batman t-shirt!! 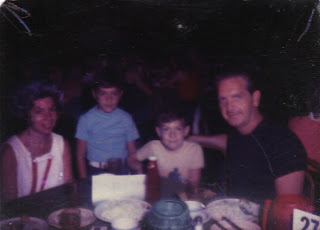