Did anyone else out there find it hard to believe that the guy training Rocky to fight Apollo Creed used to tangle with Batman? I was blown away when my older brother told me that when we left the movie theater after seeing Rocky way back in the day. Yes. I am old!! So many of you that follow along on Facebook know that the Penguin gave me a bit of a challenge. I was too obsessed with showcasing the big nose that I could not get a pose that worked for my composition. After a night of, well, failure, I decided to not think about the nose at all and let the other iconic paraphernalia work for me instead. After all, he has a purple top hat, a monocle and a cigarette holder to focus on!! Isn't that always the way. Once I did that, it just seemed to draw itself.

So I made a picture with the progression of the drawings and you can clearly see my missteps right up front. I also included the full color pic and the value study I also had laying around. 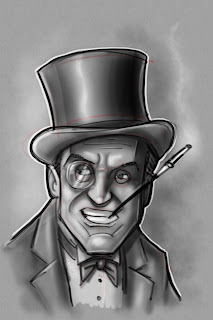 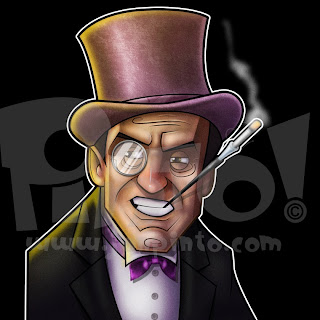