I love The Rocketeer. I remember way back in the early 80's and seeing a comic book that belonged to my friend's older brother and had no idea who it was but how cool he looked!! I went out and got my own copies and the store owner actually helped me find his other appearances since it was rather erratic. As good as they looked, it was rather hard to imagine how much better they would be when they were re-printed with better paper and color! For Christmas a few years ago, I even got the slip-cased collection and it sits with pride on my shelf. Dave Stevens' work never looked so good!!! I was overjoyed when they made a movie and saw it opening day and when I first started working at Walt Disney World a year later, my biggest thrill came from seeing the costumes and the Bulldog Café in person. Sadly the movie did not do well (like most movies I like!!) and The Rocketeer kind of faded away. And then Dave Stevens died. I was moved when I learned he died and thought how fortunate I was to have met him. It was the oddest thing. In the winter between the movie release and my moving to Florida, a friend and I were driving on a cold, wet Saturday when we drove past a local college and saw the sign that they were having a Monster Convention and one of the guests listed was Dave Stevens! We spun round, parked and went inside. These were the days when most shows were only a few bucks and you could walk right in without any lines! Sure enough, we found his table but he was not there. We milled about for a few minutes and then this skinny guy walks up to us with this giant grin and shows us the autograph picture of an old horror movie actor (I don't remember who) that he just got. He was talking to us like he knew us. It was Dave Stevens! He was like a kid in a candy store and was the nicest guy. He talked to us for a good long time and answered all our questions and I even bought a book that he signed (Just Teasing) and got a print of The Rocketeer that he signed as well. That very print is one of my pride and joys and it hangs on my wall right above me even now as I type these words.


Of course I tried to draw The Rocketeer myself several times, but I have never finished any attempts as it didn't look like Dave Stevens' version. I have read that Dave even labored and slaved over his work and I think I did as well and it just never lived up to expectations. I am VERY picky about The Rocketeer! At a recent show, a fellow artist named Danny Haas got to talking and he said that I should draw The Rocketeer. I laughed and told him of my struggles about trying in the past and then got 'round to thinking about it and made him a deal. I would do it if he would as well. He accepted and then I said, "Don't go running off and start clicking (Danny uses a mouse to create his work) so quickly! I need a head start!" He agreed and I was now committed. I really had no intention of starting for a while. Then, while on a plane trip north, I started to doodle him in my sketchbook. And then I made the mistake of putting those doodles on Facebook! Danny saw them, exclaimed, "You're killing me smalls!" And then he preceded to finish his masterpiece in ten minutes!! I already gave you a link to Danny, go see it. It's awesome. He showed me what it looked like in the early stages when it was just his line art and I thought, "that would look so cool as a wire sculpture!!" Maybe one day.

Here are a few of my very old, early attempts at drawing The Rocketeer. 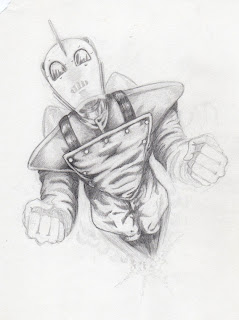 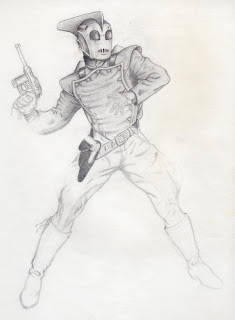 Cut to the present. Here is some of the doodles I already wrote about that I mostly did on an airplane ride. 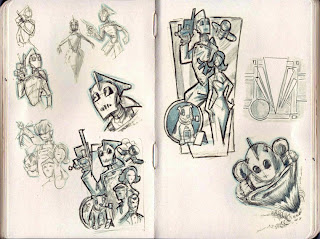 Don't know if it's obvious or not, but they were done in different intervals as I also cut and paste them into Photoshop in this early stage as well. Here are some of those. 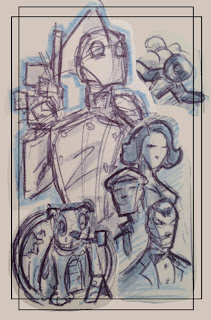 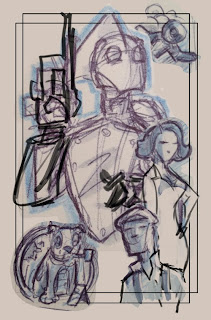 While I liked these first two well enough, I thought they looked too much like the cover of the DVD of the movie that I have so I decided to try something a little different. 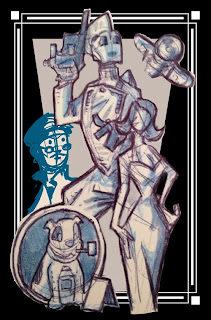 Going with this one. More to come soon.