The Second Doctor, Jamie and Yeti. Part One

Last year at Hurricane Who ( a Doctor Who convention in Orlando for the un-informed) Frazer Hines was a guest. He played Jamie McCrimmon alongside the second Doctor, Patrick Troughton. For one reason or another, I just didn't have time to do a piece with either of them in it in time for the show. I didn't really get much of a chance to talk with Mr. Hines much but he did stop by my table to glance at my work and he did inquire why I didn't have a picture of him and I explained as I just have done for you. He smiled and said, "maybe tomorrow then?". I chuckled with him and said something totally forgettable. I know that because I have obviously forgotten. The next day he walks by my table again ( I was right by the door ), and asks if I finished his picture. Now I am stunned because I obviously didn't. Even if I managed to get a drawing done there was no way I could have it painted and printed that fast. My heart sank and I made a weak apology and did indeed promise that if he was a guest next year that I would indeed have his picture. Now, don't get me wrong. Mr. Hines was polite and courteous and he very well may have been pulling my leg. I just like to project my anxiety to heighten the mood. As luck would have it, many of you know that many lost episodes have just been recovered and they are all from the second Doctor's reign and feature Frazer Hines as well. One is even a Yeti story!! Just so happens that my concept involved a Yeti!! And Frazer Hines is once again scheduled to appear at this years Hurricane Who show!

Here are my early concept pieces for my picture. 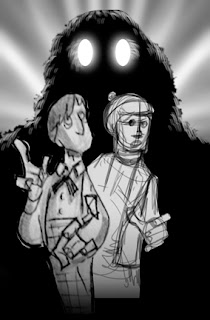 Pencil drawing was done on paper with a pencil!! 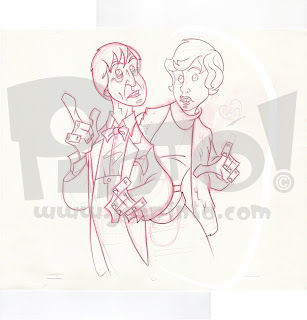