Anyone remember the Funky Phantom??

Maybe it was all the Halloween programming. Maybe it was me just getting more and more nostalgic in my older age. Who knows what brings about the creative muse?? For those that don't remember or are far too young to even know, there were a string of Scooby Doo clones that came in the wake of its success. Most were even from within Hanna-Barbara itself. Some may be shocked to know that I am the same age as Scooby. We both made our debut in 1969. As a kid growing up in the early seventies and enjoying Saturday morning cartoons as they were meant to be, I was actually kind of scared to watch Scooby Doo. My older brother loved it so I had to watch as well and I was always relieved to find out that the monster was not real and was just a guy in a mask. I didn't find the knock offs to be as scary so I gravitated towards them. The Funky Phantom was my favorite of the bunch. It was not until I was older that I was able to appreciate that the voice of the Phantom character was Daws Butler who also voiced Snagglepuss (as well as Yogi Bear and Capn Crunch among countless others). In fact he used the same exact voice for both and they were basically a homage to Bert Lahr (the Cowardly Lion from the Wizard of Oz). So Cartoon Network just ran the old cartoons again before Halloween and I got the bug in me to do a Funky Phantom picture. But I wanted to do it my way. Not a complete re-design, I want to be faithful but make it my own as well. We will see if I succeed. For all of you that I lost in the first few sentences, hit up YouTube.

This horrid doodle was done on my phone with my finger when I forgot to bring my sketchbook to keep me occupied while waiting in car line to pick up my son. 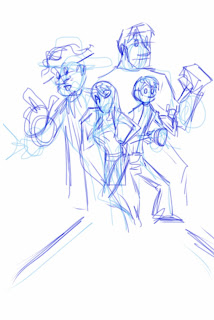 I did this compostion study on my tablet while watching TV with my wife. I actually didn't do too many versions of this. Pretty much knew what I wanted right away. 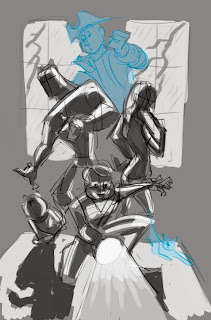 This next batch of doodles were all done in my sketchbook (in car line mostly) based on my study. 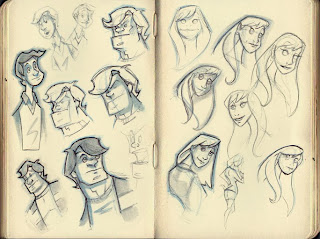 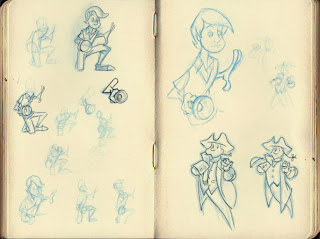 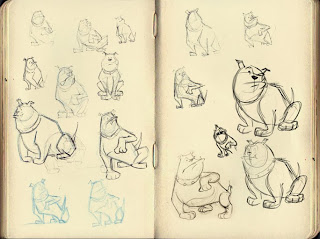 Here is the intro for ya! Look! I saved you the trouble. :)