You know I like to play around with different media and I have always been enamored with painting apps for my iPhone. When I see a new one it's like someone is dangling shiny keys in front of me and I MUST try it. Usually I stop when their is a price tag involved and invariably DO try it when it's free. I admit, I do have a few that I have paid for on my phone and they are all worth it. To me at least. Well, the other day I forgot my sketchbook when I went to go pick up my son from school and waited in car line armed only with my phone. I decided to try a little experiment. I had just seen the second installment of The Hobbit trilogy with my family and was re-watching the first one at home and had to pause the movie when the doorbell rang. When I returned I noticed that it was a pretty cool picture that I paused on. Bilbo holding his sword Sting in the dark while it begins to glow blue! Loved the lighting and thus my inspirations was found! I actually painted this pic three times as I did the same picture in three different apps. I liked certain elements of each and did only what I needed in each and then exported to my photos. I then turned to more traditional means: Photoshop! Isn't it weird that Photoshop is now considered a more "traditional" approach? Maybe it's just me. Anyway, I brought all three versions into the program and lined them up and then started masking stuff out on each layer. What I came away with was this! I like it and it was fun to do. 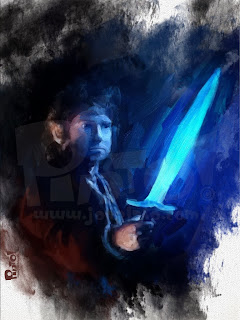 You might be saying, "Gee Jon, how come you didn't show us each step and the photo ref??". Simple answer, I forgot to save them. Ooops!!