As much as everyone told me how much they liked Star Wars: The Clone Wars, I could never get myself fully invested. Heck, one of my friends from college was even a director and yet there was something about knowing where the characters were headed just seemed to take the air out of it for me. I mean, how much suspense can you get when Obi-Wan is in a death trap when you already know where he meets his true demise. Maybe I should have just been along for the ride. I can see myself eating crow in the future after I "discover" it and binge watch on Netflix and once again come to the realization that I am a tool! So after saying that, let me also say how much I love watching Star Wars Rebels! I do. I didn't think I would, but I do. I love the look and sounds of it, the characters and the designs of the ships! I love all of it! Did I mention the designs? Maybe it's because I was always enamored with the original design work of Ralph McQuarrie that it adds an extra layer or appeal to a nerd like me. If you don't already know, Mr. McQuarrie was the original concept artist for Star Wars and his iconic designs have influenced untold numbers of artists! I really love seeing the early concept designs for C3-P0, Han Solo and such just walking around in the background and the fact that Chopper and Zeb resemble early R2-D2 and Chewbacca drawings is magic!! If you have not watched it yet, I highly recommend it. Sure, the pilot movie is basically Disney's Aladdin but it gets better and the season one finale is some of the best Star Wars I have seen in a really long time!!

So when I first started thinking about doing a Star Wars Rebels piece, I very quickly came to the conclusion that I wanted it to look like real people and not the CG characters. I don't have anything against the CG, I just wanted to "cast" the show with real people and challenge myself with really working with diverse reference material and pull it all together and make a stew! It WAS a lot of work! But I also think that it paid off and I am really happy with the final product. The response on Facebook was overwhelming as well as the compliments I have received at conventions I have already been at with it. In fact, I just got back from a show where Steve Blum, the voice of Zeb was kind enough to sign one for me!! He was awesome!! 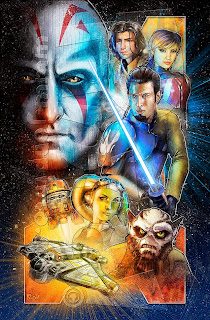