I have been in love with Ant-Man for longer than I care to admit. I must have been about ten when I randomly picked up a comic off the rack and fell in love with it! I had no idea at the time that I was witnessing the birth of the second Ant-Man. I probably should have actually read the comic but it was so pretty to look at! John Byrne and Bob Layton and it still looks slick and gorgeous today! I still have that very same comic today. Sure it's all dog eared and stained with time (nope, I failed to bag it) and I was finally able to track down the second issue several years ago. See how enamored I was, I didn't even know how the story ended for at least seven to ten years!!

So Ant-Man is a big deal now and actually has a major motion picture devoted to him and it loosely based on that very story I read over and over again for all these years. I feel vindicated! So of course I had to sit down and draw the new look version of the hero. I actually still find myself drawing the old version in my sketchbook quite often. I must admit that I find it extremely ironic that one of the most simple designs for a superhero costume has become one of the most complex ones to draw if you are drawing the movie version! It was fun anyway. Go see Ant-Man! It's not as dumb as it sounds. 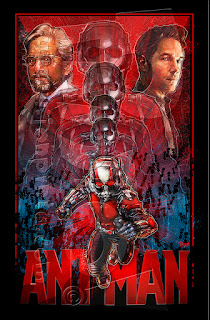 Here are a smattering of Ant-Man doodles from my sketchbook as well. 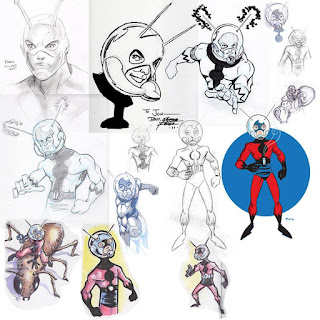