This one has been a long time coming. I have been a fan of this show since day one! Even before actually since I was breathlessly awaiting for it to premiere. I had even been a fan of the early 1990's version of the show and still have a few episodes on VHS (the pilot and the Trickster episodes if you were curious)!! My family sits down to watch every episode together and I am thrilled that they didn't go all dark and gritty for the title hero in this one. How refreshing that the hero is actually a good guy even without his powers!

I am not going to say that creating this one was easy in any way. I felt that it was a real struggle as I had many false starts and then kept getting dissatisfied and started again. My wife Mindy really kept after me to get this one done and so much credit must go to her for making me sit down and figure it out. Even so, I did totally re-work the piece one last time when I was half done. I know it looks simple in the final version, but sometimes you have to really struggle with simplicity. 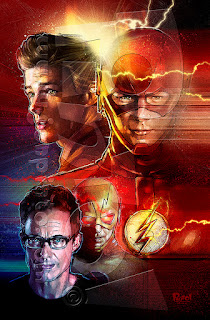