Yup. Spider-Gwen. Honestly, that has to be the dumbest name ever for a superhero or comic book. It is. I am not saying that just to trash it so please just think about it for a moment before you get all defensive. I am going to admit that I really didn't know about her as I don't read many comics anymore and I usually follow the creators more than characters and I have not tried many "new" characters in quite some time. So whey did I draw this? Well, as fate would have it, I have been seated near Robbi Rodriguez twice in the past year and once (in Chicago), right next to him. We chatted a bit when he was not swamped with fans and he signed and gave me a copy of the first issue for free. Nice guy. It was months later before I actually read the book but it did look nice and I could not help but notice that there are SO many ladies out there that have been taken with the character and started to cosplay her in mass quantities! Plus I kept being asked if I had any Spider-Gwen art or planned on doing any. It wasn't until I was walking out of a convention that I was suddenly hit with the idea that I should do one and that I could use Emma Stone as the likeness. Seemed like a natural fit for me considering the work I have been turning out of late. I know that Emma is more than likely never to play the part again and if we see a Gwen Stacy in the movies again it will be played by another actress but she is currently in the conscious of the pop culture masses and who am I to not indulge that. Exactly! Plus, I could always update the picture should someone else ever take on the mantle! Ha!!

So, here is Spider-Gwen! 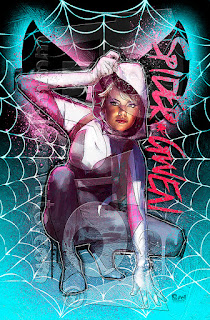