I admit that I have never read or even looked thru a Walking Dead comic book. I also didn't watch the TV show when it first came on either. My wife and I got hooked on it when it aired as re-runs just before the second season and we were hooked. We have not fallen off and it's still one of the only shows that we actually watch the night it's on! That says a lot considering the time of DVR and on demand services that are available today. I have done a Walking Dead piece before. Some may remember the Michonne picture I made a few years back. It was in my "toon" style but it was fairly well received.

So cut to a few years later and my style has changed and I have been showing at a lot more comic book and pop culture conventions and people always ask me for Walking Dead. I have been at several shows and seen the mass of people that gather for Norman Redus first hand. But I stopped printing my Michonne piece some time back and I have shied away from doing any other Walking Dead related drawings for one reason or another. So when a Walker Stalker convention announced they would be coming here to Orlando, I figured the time was right to do another piece. I really enjoyed piecing this one together. The biggest hurdle was to pick which characters to use as I didn't want to paint a million heads all in one. I figured I could always do more and use other characters in each if the muse dictates it so. I did take the most liberties with Rick. I know that he never really wore his police uniform with his beard, but I found that both elements were iconic and wanted to mix them. I also took some flak for putting his gun in his left hand (Danny!!) but I actually found reference to support me on that front. Plus when you are a bad ass like Rick Grimes, you can shoot with either hand anyway. Unless it's in the comic. From what I am told. 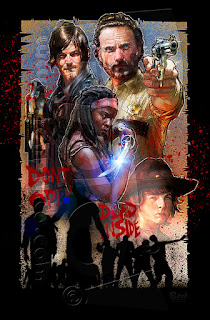