So lets jump ahead about 40 years. Not really. More like in relation to the cinematic version of Batman. My last  post was bout the 1949 serial and the man who played Robin so if you add 40..., you get the idea. This movie was huge for me. I remember paying to see a movie I didn't care about because the Batman trailer was showing with it. I collected all the newspaper and magazine articles leading up to it. I even used me lunch hour from the bank I was working at to go buy tickets in advance the day it premiered for me and all my friends! Yes, you had to go in person back then. No internet for the masses yet. We ordered pizza and watched the 1966 movie as we ate before heading out to the movie theater. There must have been 12-14 of us. It was awesome!! The movie was fun as well. Looking at it now it may be dated as far as superhero movies are concerned but it really set the tone for what was to come. Hard to believe that Superman was 11 years earlier than this and it would be another 12 for Spider-Man. Kids have it good now.

So I made one artistic change. The bat symbol on the bat suit is not screen accurate for this movie as I always felt that they got it wrong. They must have felt that way as well as they fixed it for the sequel. No biggie really. 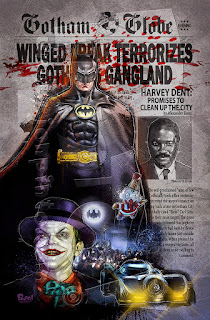