Star Wars fever is at an all time high. The anticipation of the new movie is crazy and I am caught up in it like millions of others. I grew up with Star Wars. I was in the 3rd grade when it came out and it was less than a year after I lost my father. I have vivid memories of waiting around the block to get into the old Palace theater in Bergenfield, New Jersey with my mother and brother and then right after the movie walking over to County Discount where my mother bought two action figures for both my brother and I. One we could open right away and the other was put aside until later in the year. I chose C3-PO and Luke Skywalker. My brother got Darth Vader and a stormtrooper. When The Phantom Menace came out I was working in my first studio job after college and I went to see the movie with fellow nerds and artists and I bought toys at the local Wal-Mart and had them on my desk. I remember people talking endlessly about it and gathering around monitors when the trailers hit. We waited forever for those videos to load back then! So here I am just over a week until the new movie and I am now married with an 11 year old boy and I can't wait to sit in the dark theater with him while the the trumpets blare the now classic tune and a brand new crawl moves across the screen. Star Wars really has become more than just movies as the characters have transcended the generations and are prepared to do it again. When I saw the first full trailer to The Force Awakens, it was the familiar that I latched onto and felt re-connected with memories much like old friends. Seeing the Millennium Falcon flying again gave me chills but it was the quick scene of Han Solo and Leia that gave me goosebumps. I don't know the context of the scene yet, but I have hope. 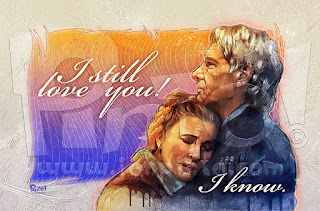