So what happens when two things you love collide? When I was a kid growing up watching re-runs of shows long gone, two of my favorites were The Adventures of Superman (obviously) and I Love Lucy. I was simply blown away one day when Superman himself showed up on Lucy's show playing Superman! I actually have the episode recorded and saved on my DVR for several years now. In fact I just learned that there is a color version of it but I have only seen clips and screenshots of it and not the whole episode as of yet. I'll have to look for it.

So I was in California recently and was asked several times if I would consider ever doing a Lucy/Superman piece. Actually I was asked by the same person but he did ask several times! I thought it was a great idea but I really didn't think it would sell that well. More recently I finished a retro looking cartoon drawing of Lost in Space. I didn't plan on making that picture either, they were just doodles in my sketchbook that all came together in spite of my plans. People seemed to have responded to it well on social media tho and I was pleased with the results. While driving home from school, my son asked if I planned any other pics in that style. He thought doing other old shows would be fun and even made a few suggestions including, you guessed it, I Love Lucy. Funny how life works sometimes.

Here is my Superman/Lucy picture. Enjoy! 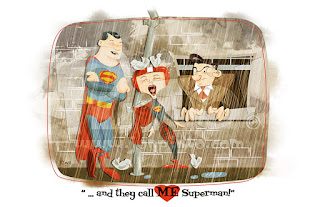