On one of the other social media's, I got a comment when I posted the silver age picture of Wonderman asking for a "Liefeld" version. If you are unfamiliar, Rob Liefeld was quite the name in comics back in the 90's. He has a very distinctive style that became all the rage and had many imitators. My memory may be a bit fuzzy on the subject, but Liefeld himself may have been influenced by the Jim Lee style. The thing is, Rob's anatomy was pretty distinctive as well. He's called out a lot for over exaggerating the form so much that it gets ridiculous. To be fair, it may have been partially due to the amount of work he was putting out as I have also seen examples of his work that looks fine. So now that we are all caught up to speed, I decided to indulge the comment. My family and I are selling our home and the packing and "staging" of the house is happening as of this writing and is taking quite a bit of our time. So as we sat down last night to relax a bit in front of the television, I busted out my old tablet and drew this. 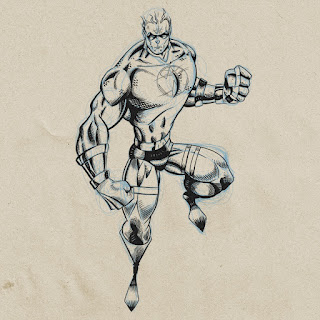