As you know, when I was a kid I was enamored with comic book super-heroes. Maybe it's just a part of being young but I always held the "kid" heroes in a special place in my heart. Naturally Spider-Man and the Teen Titans fit into this category but there were lesser known ones that I gravitated to as well like Nova and a certain back up feature in Action Comics called Air Wave. This kid was the nephew of Green Lantern Hal Jordan and inherited his costume from his father. I thought he was pretty cool. Years later I meet longtime comic artist, most notable for his thirty plus continuous years drawing Spider-Man, Alex Saviuk at a convention. I introduce myself and mention that we had a common friend. My old buddy Mike Sanborn and Alex briefly worked together at a studio in Orlando. I have seen Alex at several shows since and had the pleasure of sitting next to him at one and got to know him much better. A few months back, I picked up an old issue of Action Comics out of a fifty cent bin that had the Air Wave feature in it. I couldn't believe that Alex was the penciller on it!! Wow!! So when I just saw Alex again this past weekend in Metropolis, I asked him about it. Later, he asked me for one of my prints (maybe two) and said he would trade with me. I loved one of his Phantom pieces and then teased him asking for any Air Wave! We chuckled and carried on with our day. The next day Alex surprised me with a sketch of Air Wave!! For me!! I couldn't believe it. It's awesome and I stared at it for the rest of the show. As soon as I was unpacked after getting home I scanned it in to make sure I had a copy for posterity. Then as I was procrastinating over work, I thought it would be fun to turn the sketch into a blue-line and "ink" over the top. I then would up coloring it as well! SO MUCH FUN!! I never inked anyone else before let alone someone I admire as much as Alex. I hesitantly showed it to him and was so very relieved that he liked it. I hope you do as well. 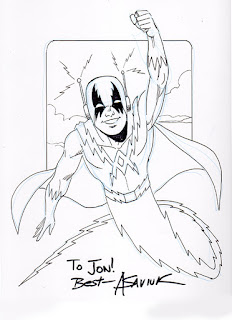 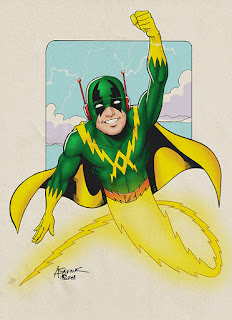