I fell in love with the Blue Beetle when I was a kid. A friend of mine had several old Charlton Comics which mostly included Steve Ditko versions of Captain Atom and the Blue Beetle! I was awestruck right away and always wished that he would have traded me these books! I originally found a beat up copy at a small show I was at and went back to my table feeling inspired to draw. I had an old, yellowed drawing pad and proceeded to pencil a picture of Blue Beetle. So much fun. When I returned home I decided that I need to ink and color my picture digitally. Here is the result. 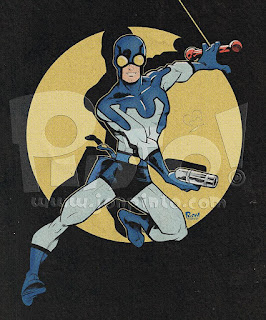