I have been a fan of NASA since I was a really little kid. My parents were big fans as well and it was the joke in the house that my brother and I were named after famous astronaut, John Glenn (my brother's name is Glenn). My nickname growing up was "Buzz" and I was born on May 5th. I would also drive by the sign that commemorates Oradell, NJ as the birthplace of Wally Schirra every day on my way to high school. If you are a fan of NASA then you know what all those references mean. I remember more about visiting Kennedy Space Center as a kid than I do Walt Disney World and when I first moved to Florida, I convinced a whole group of people to go to Cocoa Beach for the day to watch a shuttle launch. I can now actually see enough of the booster rockets on a launch from the front of my house.
So when Space X recently launched their first manned crew to space, I was ecstatic! I was glued to the TV and raced outside to catch a glimpse in person! With my passion for NASA re-ignited, I finally began work in earnest on a piece I have been thinking about for a very long time. I figured I would start at the beginning with the Mercury 7. This has been so much fun!
Here is my picture honoring the original NASA astronauts and their accomplishments.
Enjoy! 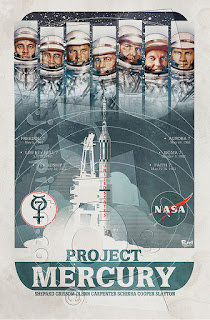 And here are the individual, work in progress astronauts: