Every so often I get asked to do some commission work. And 90% of the time it's for something totally out of the ordinary. I get it. People are asking for what they want and can't find anywhere else. I guess a drawing of a classic style Superman is too commonplace. Hence the requests for "Batman with a ski hat and a Hawaiian shirt". I don't usually post things of this nature because I feel that it's a personal thing for the one that requested it and that it probably lacks a widespread appeal. So I recently took an "odd" commission and to be honest I took it because of two reasons. Things have been weird and I've lost a huge amount of income this year due to the Covid, and that I have known the person who requested it for more years than I can remember. It was for a wedding gift as well.

So the commission, as you can surmise based on the title of this post, was for Boba Fett with Ursula from the Little Mermaid, done in a pin-up style, standing on the box the hunter was supposed to put the heart of Snow White into and with the Pittsburgh Penguins logo worked in somewhere. Easy.

I must admit, it came out better than I thought it would. The client was happy as well as the couple that received it as a gift. Their names were on the scroll at the bottom. I removed them for their privacy. 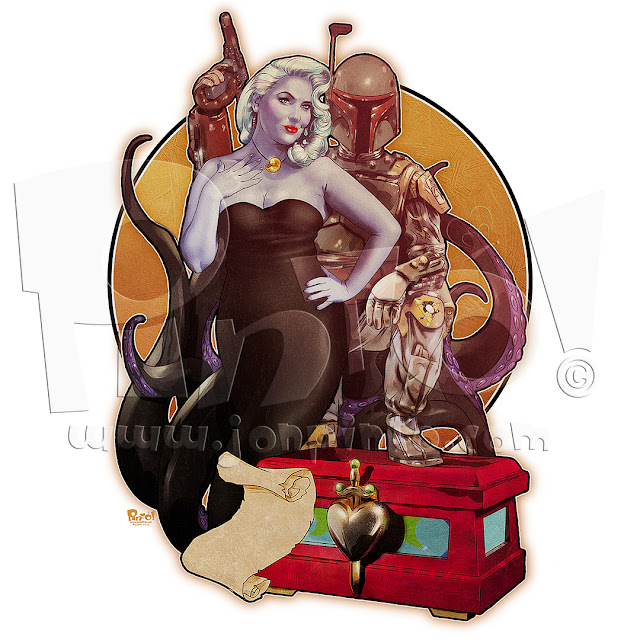