So new Star Wars art always seems to have a bigger audience and response. I wish there was a better story to go along with this post. Unfortunately, this was a bit of a disappointment. As many of you may know, Star Wars holds an event every two years called Celebration. They don't have a usual artist alley, but instead have a handpicked group that a jury selected of artists that have worked on LucasFilm properties before. You need to apply in short. So a few of my friends have been encouraging me to do so for some time. About a year or so ago, I decided that I would and began work on my submission. Oh. If you were curious about my LucasFilm credentials, I have worked on quite a bit of Star Wars themed M&M's work as well as designing two official t-shirts for the old Star Wars Weekends held at Disney. So I obviously chose Obi-Wan as my subject as he is my favorite character from the Star Wars franchise and I had an idea that I thought would be pretty cool. I set about my work and actually liked what I came away with. The down side was that I had to basically sit on this design for well over a year before the submission was open. So I did. Finally I got to submit and .... things went south. I don't want to get into details here but there was a mishap in the submission process and I was left out. I was pretty bummed out for a bit and debated sitting on this design again but another two years seemed like an eternity. So I decided to just do it myself like I always have and will try to come up with something new for the next submission. 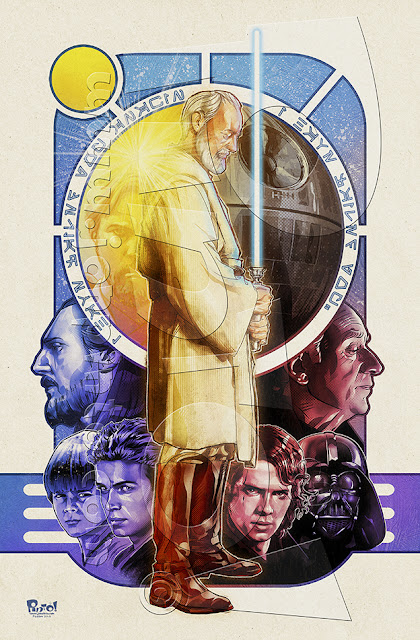