Raiders of the Lost Ark 40th!

Raiders is 40?? How can this be??? I remember Raiders coming out but not the way that you would expect. I was 12 when it hit theatres and I remember the commercials but I guess I didn't pay close attention and I wasn't really excited to see Han Solo be somebody else! Without internet and cable/satellite television, I knew very little about the movie before it came out. We also went on a family trip to visit friends of my mother here in Florida ( I was living in New Jersey). They had kids close in age to my brother and I and one older child as well. So one night, the kids all went out to the movies. The older kids bought tickets to a Cheech and Chong movie and the younger kids bought tickets to Raiders. But we didn't watch Raiders. One of the older kids came out of the theatre with all the ticket stubs to the Cheech and Chong movie for us younger kids to use to sneak in to an R rated flick! I can honestly say it was not my plan but I didn't do much in the way of protest either. So afterwards, back at the house when asked how the movie was, in order to deflect any further questions about the movie, we told the parents that it wasn't a good movie and we didn't like it! It then became a huge hit. Of course once I was back home in the Garden State, all my friends wanted to see Raiders and I had to find a way to convince my mother to let me go see a movie I didn't like a second time. I finally went and I freakin' LOVED it!!! I was obsessed! I then got the comic adaptation and the action figures!! My mother did get suspicious and when my explanation of it being "better the second time" landed with a thud, she knew that we never watched it that first time in Florida. Sorry Mom. Raiders has been a constant in my life ever since. Just as much as Superman if you can believe it. I still have my toys, the comic got signed by the cover artist Howard Chaykin, still have my other comics that John Byrne kicked off the run of and I've drawn him a few times myself. Which brings me to today. Unfortunately, I have had very little free time of late to create a totally new piece to celebrate the event. I did, however, have a few "side" pieces I had done a few years back that I never really used. I had shared them before too, but they were simpler compositions. So I dusted them off, touched them up and added a few new elements to create a new picture. I'm ok with it. I mean, if Professor Jones can dig up old relics and dust them off, why can't I?? 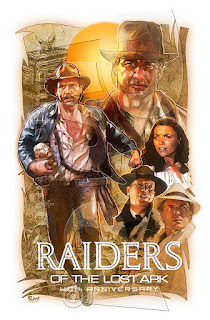