The One and Only George Perez

Sorry for the long delay. Being a person of regular routine and being thrust into the world of freelance illustration without warning, it has taken me some time to settle down. Actually, I should clarify that statement to read, "I have not yet found my freelance routine." Well, whatever! So far some work has been coming my way and I have even gotten paid!

Enough about that. I have been meaning to sit down and write this entry to my blog for some time but I have kept shrugging it off. Seems so overwhelming for me. And why not? Who among you out there in cyber land can admit absolute calm and maintain your composure when dealing with one of your heroes?? No, I am not talking about Superman, but one of the few people out there that have had the pleasure to bring him to life on actual comic pages!! When I was a wee lad in New Jersey and pouring over stacks of comic books my brother and I kept in our closet, the first artist that I could ever recognize just by looking at his drawings was George Perez. This is back in the day when he was working on Fantastic Four and the Avengers. The first time. The 1970's for crying out loud! I loved his stuff. I wondered why his drawings were so much better than other comics with the same characters. I studied how he did things and I decided I wanted to be an artist like him! Now, in previous posts you can see that I did have a large "Perez Influence" in my work, but I could never attain his level of greatness. I kept following his work and I was on top of the world in the early 80's when George was king and doing the top selling book "The New Teen Titans". Basically, if George drew it; I bought it! I even kept drawing enough to get myself into art school.

While in art school, my friends and I would rent a van down in Sarasota, Florida, and drive non-stop to my mothers house in Jersey so we could attend the New York Comic Con. This one particular year, George Perez was slated to be there. I brought some favourites for him to sign, and stood in line waiting to meet him for the first time. When my turn finally came, I became so tongue tied that the most I could utter was something to the effect of "your my hero" and handed him the books to sign. My friends doubled over laughing and I heard about it ever since. I blew it.

Ten years later I am wandering an Orlando based convention with my friend Tim Rogerson. We went to see our co-worker who had a table set up for his work and we visited with the table housing our Alma mater. We also got some stuff signed by Darwyn Cooke and chatted with him for a bit as well. Very nice guy and very talented. If you have not read New Frontier, go do it now. Anyway, as we meandered about I stopped short when I spotted none other than George Perez at a table drawing. Alone. I figured he must have just gotten there and no body knew he was available yet. I quickly thought of my past encounter and that God has given me a chance to redeem myself and with Tim as my witness. I rationalized that I was now a working professional artist as well and should have no problem talking to him. I made a beeline for his table, stuck out my hand to shake his and blurted out, "Your my hero." Again. He was polite, shook my hand and I basically whimpered off with Tim laughing hysterically at me. I was now two for two.

Just recently, while my Mom was here visiting, I went down to my local comic shop in Clermont, Florida. A real local place. Small and "old townie". I actually like it alot but not much ever happens in Clermont. Well this particular day I went in with my mom and picked up my books. While checking out I spot the notice that they are having an event later in the month with none other than George Perez!! What the.....??? Here??? How??? Turns out that George lives not too far away and is really big in theatre and Clermont happens to have a local theatre group where he was going to be performing "Lil Abner" and he arranged a signing event to raise money for the theater company!! And for only $50 I could get him to draw me anything I wanted!!! I plopped down my money and was giddy for days thinking about what he should draw for me. When the day finally arrived, I brought with me a collection of b/w plates of comic cover art he had released back in 1990. 12 in all. I figured maybe he would sign my favorite one as well as get my sketch. I entered and there he was. Just sitting at a back table chatting with the locals and drawing away. I stood back and chatted with the owners for a bit while I gathered my nerves. I was almost shaking. I finally made my way over and introduced myself and told him that I already made an ass of myself twice in his presence and I was here for the trifecta! He laughed and I managed to make small talk long enough to start to feel comfortable with him. So much so that when others were gathered and I asked George what he would be working on next professionally, he told us that there were three things offered by DC and he accepted two of them but could not tell us what they were. So I asked what was the one he turned down. He told us that he turned down the opportunity to write Teen Titans and explained why he did so. While then talking about Teen Titans and how the anniversary is coming up and how DC wanted to cash in on all of this I posed another question to him. He actually stared at me for a moment and then smiled at me and revealed to everyone that what I asked him was exactly what he would be working on. I am purposely being vague about what that is because it is not official yet and his partner in it does not even know that George has agreed to finish this project (there's your hint.). Wow! Then I even got to just stand there and talk to George as he drew a head shot of Orion of Kirbys New Gods for me. And those b/w plates I brought with me? He signed ALL of them. 12! And the cover!! What can I say, I finally, actually spoke with one of my biggest heroes and influences. I asked him questions, he answered and he even asked about my work. He was the nicest man and very generous.

Here is the sketch and some pics. 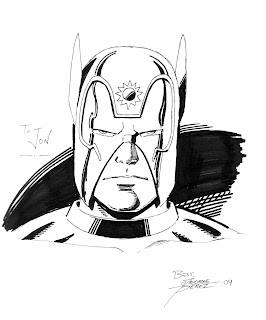 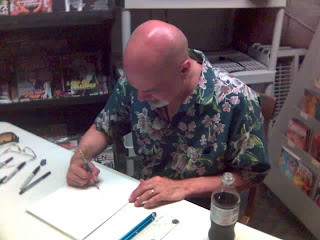 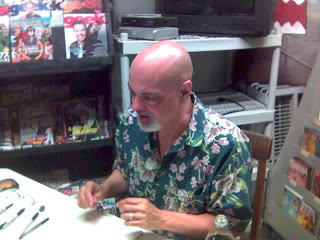